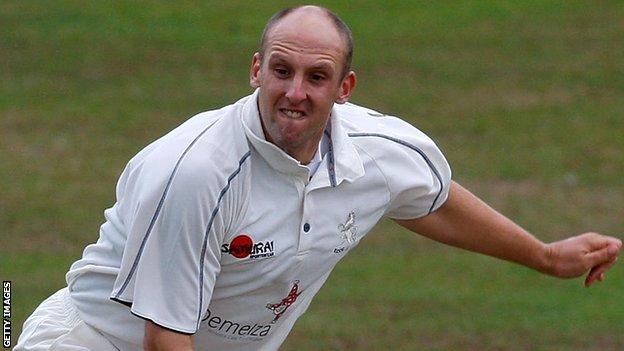 Kent made short work of Leicestershire as they wrapped up victory by an innings and 279 runs inside three days.

Although Michael Powell fell for 134, James Tredwell (87) and Matt Coles (47) piled on the agony for Leicestershire as Kent were finally dismissed for 533.

Needing 392 to make Kent bat again, the visitors were never in the hunt as they were skittled out for only 113.

Tredwell this time took centre stage with the ball, taking 3-38, while Darren Stevens weighed in with 4-24.

Kent's victory lifts them above Yorkshire into second place in Division Two, 26 points behind leaders Derbyshire.

It was the sixth biggest innings victory in Kent's history and also the sixth heaviest innings defeat suffered by Leicestershire.

"Kent completely outplayed their visitors, building on their big lead in the first session thanks to James Tredwell's diligence at the crease, Matt Coles' occasional brute force, and even the first six of Mark Davies' career.

"Leicestershire batted as if they'd already long given up any chance of rescuing the game. As tight as Kent bowled and fielded, the capitulation was watch-through-your-hands stuff - especially when Tredwell eased out three batsmen in his first two overs.

"For Kent, the result is some recompense for the number of times they've been on top but denied victory by the weather this season. Leicestershire need to find some way of lifting a young team's morale out of the gutter after a humiliating defeat."