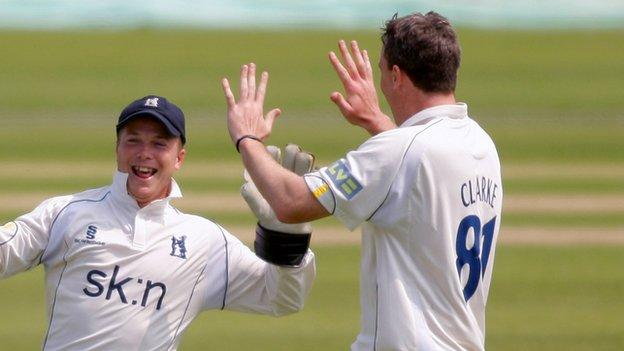 Championship leaders Warwickshire cemented their place on top at The Oval as they knocked off the 41 needed to beat Surrey on the final morning.

Overnight pair Tim Ambrose and Rikki Clarke remained unparted as they took their fifth-wicket partnership to 74.

Ambrose finished on 89, while Surrey old boy Clarke took his side to within sight of victory with three fours off one over from Stuart Meaker.

That completed a recovery begun the previous day by Ambrose and Will Porterfield, who rescued their side from potential defeat at 37-4 with a fifth-wicket stand of 111.

Surrey's former Worcestershire and England off spinner Gareth Batty finished on the losing side, despite taking 10 wickets in a match for only the second time in his career.

Warwickshire took just 33 minutes to complete their fourth win of the season and go 15 points clear at the top, putting them back above Somerset, who temporarily went top when they beat Durham earlier in the week.

Several hundred spectators turned up in the glorious south London sunshine to watch the conclusion of a magnificent match.

But the Bears' final-day task proved very simple in the end, once four leg byes in Jon Lewis's opening over had got them up and running.

"When we lost the toss on that first day with the blue skies on what looked like a very good wicket I thought we bowled exceptionally well. Then with the bat we were in a good position to force home the advantage but credit to Surrey they fought back well.

"We were staring down the barrel at four down. But Will Porterfield and Tim Ambrose put in a great knock, followed by Rikki Clarke.

"They made it quite an easy win in the end which is credit to the guys. There's a real strong belief in the squad whatever situation we're in."