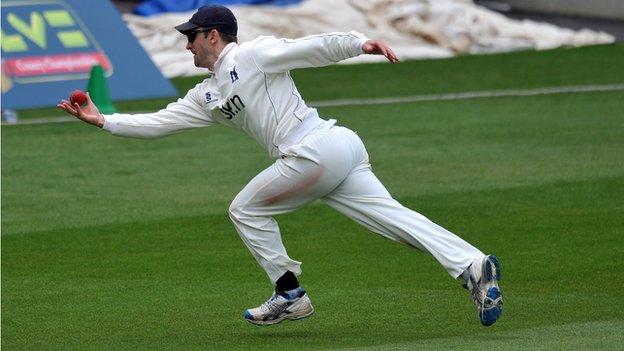 Warwickshire skipper Jim Troughton admits that their County Championship near miss in 2011 is helping to drive them on to going one better this time.

After completing their fourth win in six matches, the Bears are just a point off top spot with a game in hand.

But Troughton believes there is more to come from his team, telling BBC Sport: "We feel we've got a point to prove.

"We're still a growing squad and I still think we've got the potential to get even better."

The Bears, second to Lancashire in 2011, are just a point behind Nottinghamshire (who went back above them with victory over Sussex on Monday) despite suffering key injuries.

Last summer's star turn Chris Woakes missed the first month with an ankle problem, and fellow paceman Boyd Rankin has yet to play this season.

But, speaking after completing Saturday's five-wicket Championship win over Surrey, Troughton points out that his side's success is based on strength in depth - and his team's battling qualities.

"In four-day cricket there's always going to be moments of momentum one way or the other," he added.

"We've managed to push forward our advantage but also, when we're been on the back foot, we've been able to battle out of it."

"Our ethos is to remain grounded and make sure every game we're challenging every ball."

Folowing Saturday morning's early finish at The Oval, the Bears had a 10-day break from Championship cricket until they head for Chester-le-Street to face Durham on Tuesday week (5-8 June).

But they did have to face three successive CB40 away games in between.

The Bears in the 21st Century

That has taken them joint-top of Group C with Sussex - and it also marked a heartening return to form for the skipper, who weighed in with 27.

Having failed in his previous CB40 game and managed just 50 runs in nine Championship innings this season, Troughton admits that he is concerned about his own form - but is grateful to be part of such a great team effort.

"I'm very disappointed. I want to contribute. But credit to the guys, they're picking up the slack and performing really well.

"And I've played long enough to know that, as long as I continue to work hard in the nets, remain positive and have that belief, then the runs will come. I'm sure they will."