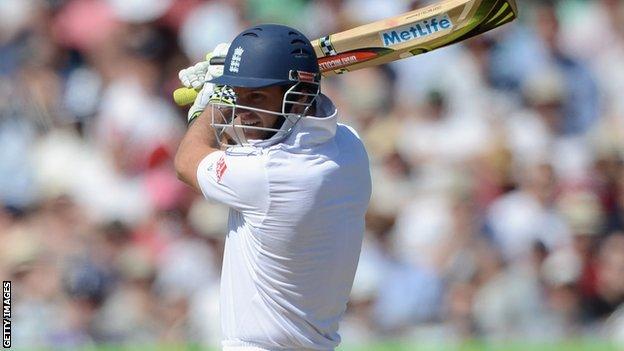 Andrew Strauss hit his second century in two Tests as England made hay against a struggling West Indies attack on another glorious day at Trent Bridge.

Strauss's unbeaten 102 and a typically belligerent 72 not out from Kevin Pietersen took their side to 259-2 - 111 in arrears - by the close of play on day two, on a pitch that remains perfect for batting.

Under cloudless skies the England captain began cautiously and survived some rash shots to first prosper and then take control with his 21st Test hundred.

It puts him just one behind Wally Hammond, Colin Cowdrey and Geoff Boycott on the list of England's most prolific Test centurions and, together with his 122 in the first Test last week, represents a definitive end to arguments about his immediate Test future.

As at Lord's, the shot that took him to three figures was greeted with a rapturous standing ovation from both a packed house and delighted England balcony.

"What a start to the summer for Andrew Strauss - a hundred at Lord's and I'd say this was a better innings. He was watchful then we saw the old favourite shots, a wonderful innings and a really good day for England."

West Indies captain Darren Sammy had earlier gone on to make his maiden Test century as the tourists moved on from their overnight 304-6 to 370 all out - perhaps below par on this excellent batting track, but a fine recovery from the depths of 63-4 and 136-6 on the first day.

Sammy rode his luck at times, particularly against James Anderson, but, if his century came up with a streaky leading edge to third man, then the landmark was richly deserved.

He has been critically described as a specialist captain, lacking either the batting or bowling skills to merit selection, but his innings here was fundamental to West Indies staying in the contest.

He fell for 106 in the sort of cavalier fashion that he made his runs, top-edging a pull off Tim Bresnan to Pietersen at deep midwicket, and fellow centurion Marlon Samuels went soon after, slashing the same bowler to Anderson in the gully to depart for a Test-best 117.

Their partnership of 204 was the highest for the seventh wicket in Tests by any side in England, beating the 174 shared by Colin Cowdrey and Godfrey Evans against West Indies at Lord's in 1957, and the rapid rattle of wickets after their dismissals underlined just how important it had been.

Kemar Roach fended a short one to the diving Strauss at slip to give Bresnan his fourth scalp and Shane Shillingford then aimed a mighty mow at Graeme Swann to be stumped for 16.

"What a difference a week can make. Andrew Strauss is now the in-form skipper, a danger for the opposition, a talking point no more."

Roach and the recalled Rampaul began England's innings with a searching line and tight length, only for Roach's continued issues with no-balls to scupper hopes they could make serious holes in the top order with the new ball.

Alastair Cook was handed an extraordinary double reprieve when nicks behind on one and 12 were ruled out due to Roach over-stepping, his torment deepened by shouts of "no ball!" from the crowd on every delivery thereafter.

Strauss was becalmed, managing just one scoring shot off his first 27 balls. When the runs did come - drives crashed through mid-on, cuts slapped away past gully - so did the false shots and edges.

But it was Cook who went first, pushing at one run across him by Rampaul to get the thinnest edge behind to Denesh Ramdin for 24.

Jonathan Trott was quickly into his stride, clipping through midwicket and driving with alacrity, and it was a surprise when he fell in the first over after tea, lbw for 35 playing round one from Rampaul that nipped back.

Pietersen almost followed as two tight lbw shouts went marginally in his favour. Characteristically, he responded by heaving off-spinner Shillingford into the pavilion and, as Strauss joined the acceleration, England began to take control.

Some 63 runs came off the first 12 overs after tea, the atmosphere at a packed Trent Bridge increasingly resembling a carnival as the thousands in fancy dress cranked up the singing and chanting.

Pietersen began to unveil his full attention-seeking range of shots, crashing anything on middle stump through midwicket with that bottom hand, flicking Shillingford over the wicketkeeper with a scrappy version of the Dilshan scoop and battering Sammy through the off side for brutal fours.

Strauss was now also in complete control. Another trademark cut took him into the 90s, a sweep to 98, and when Shillingford offered him a full ball on middle and leg he clipped it away for four to deafening roars.

Strauss and Pietersen's partnership - currently worth 136 - is their first century stand in 34 Test innings together.

With the weather set fair for the rest of the weekend, they will hope to take it much further and set England up for the win which will give them an unassailable 2-0 lead in the three-match series.