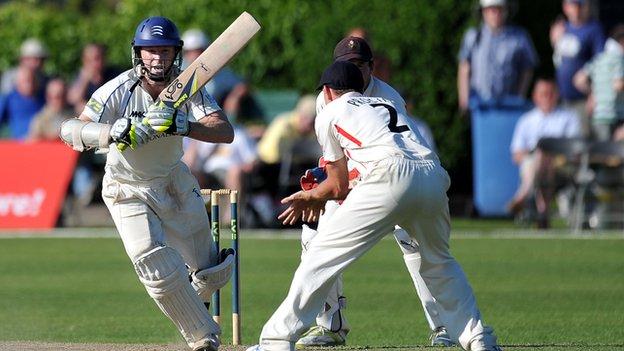 Australian opener Chris Rogers hit a century as Middlesex batted throughout the final day to deny county champions Lancashire a first win of 2012.

Resuming on 29-0, chasing an unlikely victory target of 429, Middlesex lost just one wicket at sun-baked Aigburth.

It was a first century since early March for Rogers, standing in as captain of the four-day team while Neil Dexter attempts to regain form.

Having hit his last hundred in the Sheffield Shield on 3 March for Victoria against his former state Western Australia, Rogers survived two loud lbw shouts on 16 and 55 off Glen Chapple, in the day's first over, and Simon Kerrigan.

And he was caught at second slip off a Steven Croft no ball on 112 during the afternoon session.

But the draw, only the second drawn Championship game at Aigburth in 14 matches, leaves Lancashire still without a win this season in seven matches.

Lancashire gain nine points from their fourth draw of the campaign, which lifts them out of the Division One relegation zone ahead of Wednesday's trip to face bottom side Durham at Chester-le-Street.

"We played well to set them 429 and give ourselves our a day to bowl them out.

"But it didn't turn like we hoped it would and Rogers played very well.

"Had they been chasing 380 and had a go at it, it would have been tough to stop them had two people got in on it."

"There are always nerves and there were still nerves at tea. But Chris Rogers batted literally for the whole day and, on a fourth-day pitch, it was a magnificent effort.

"Joe Denly looked composed when he came in and it was a great effort by the lads.

"We showed the resilience we have in the team and we're pleased to be walking away with the draw."