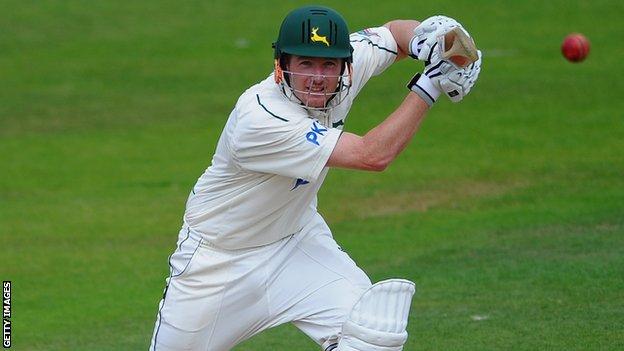 Opener Riki Wessels hit a superb 184 not out at Hove as Nottinghamshire seized control against Sussex.

After Samit Patel (4-67) took the final Sussex wicket with just four runs added to bowl out the home side for 309, the visitors then responded with 320-4.

But, despite three Sussex wickets in the final session, Notts look on course to build a big lead on day three.

On the ground where his father Kepler played for Sussex in the 1970s, the in-form Wessels hit his 14th first-class century - and his third of a campaign already interrupted last month for four weeks when he broke a finger.

It was Notts' first century partnership for the opening wicket since 2008, when Will Jefferson and Bilal Shafayat put on 157.

But there clearly must be something about the sea air here that appeals to them as, ironically, that was also compiled against Sussex at Hove.

"The debate after Day One was how good Sussex's score was. The answer at the end of Day Two is 'not enough', on what has proved an excellent batting surface.

"Sussex didn't help their own cause by bowling too short, only Monty Panesar, Steve Magoffin and late in the day Chris Nash, bowling with the necessary control.

"But credit Riki Wessels, whose hundred was a magnificent display, with shots all round the wicket."

"A splendid innings from Riki Wessels lifted Nottinghamshire into a position of some strength at the halfway point.

"He progressed to his highest score for the county, with the added incentive of a texted bet from his father.