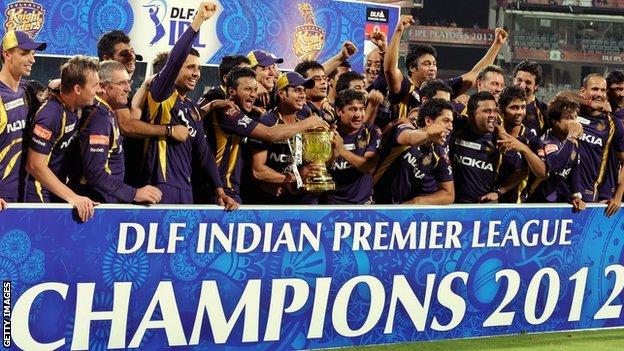 Bisla's dismissal sparked a flurry of wickets but Manoj Tiwary saw them home with two balls to spare.

The Knight Riders had needed nine off the final over, bowled by West Indies all-rounder Dwayne Bravo, but Tiwary smacked two successive fours to hand his side the title and spark wild celebrations.

Kolkata, in their first final, had chosen Australia paceman Brett Lee ahead of hard-hitting New Zealand star Brendon McCullum among their four permitted overseas players - with McCullum's omission handing uncapped Indian wicketkeeper/batsman Bisla a place in the side.

But Vijay and Lee's international team-mate Hussey made hay against the veteran Aussie quick bowler early on, and after Vijay departed, Raina joined in the fun, as all-rounder Yusuf Pathan's only over went for 17.

English players in the 2012 IPL

Hussey fell with three overs left but Raina kept going, hitting five sixes before he holed out in the deep off the final ball of the innings.

Kolkata must have feared the worst when they lost Gambhir in the first over, heaving across the line to a straight ball from Ben Hilfenhaus.

But the Super Kings took 14 overs to break the Bisla-Kallis stand, by which time Kolkata needed 52 from 32 balls for victory.

Laxmi Shukla and Pathan departed in quick succession, followed by Kallis - who had been suffering with cramp - as Chennai, led by India captain Mahendra Dhoni, and their excited fans sensed a third successive IPL title.

But Tiwary held his nerve to pull those two boundaries through mid-wicket and deliver the title to Kolkata, whose owner - Bollywood superstar Shah Rukh Khan - was quick to join the players' celebrations.

Bisla - who has not been a regular in the Kolkata side - was named as man of the match.