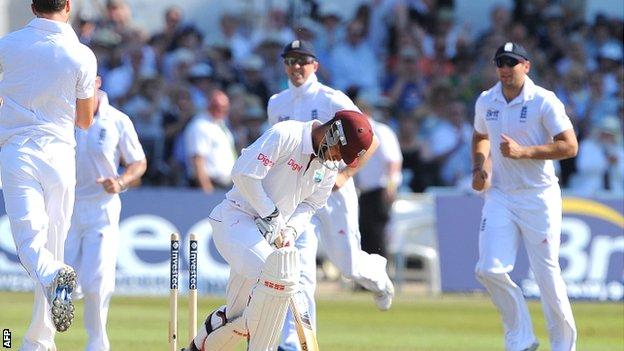 The Windies slumped to 61-6, only three ahead of England, on the third day of the second Test at Trent Bridge.

"It was immature and these individuals need to think about the requirements to play at this level," he told BBC Sport.

"They must be given credit for the way they bowled, but batters did not come to party and need to sort their heads out where shot selection is concerned."

But James Anderson struck twice in his first three overs, Stuart Broad claimed the key wicket of Shivnarine Chanderpaul and Tim Bresnan picked up cheap three wickets as England closed in on the victory that would give them an unassailable 2-0 lead in the series.

Richards was particularly critical of wicketkeeper Denesh Ramdin, who was lbw to Bresnan for six on Sunday and has made only made only seven runs in the match.

"Tim Bresnan once again proved that what he lacks in glamour he makes up for with old-fashioned Test class. He deserves our praise and respect."

"When he first came into the game I felt he was a huge prospect. For some reason he has deteriorated in such a big way. Just the way he is walking back, he looks like a totally lost guy."

Kirk Edwards, having batted at number three in the first innings, was forced to come in at number seven after missing part of the England innings because of illness.

He fell for a second-ball duck - another lbw victim of Bresnan - and has mustered just eight runs in four innings in the series.

"My heart bleeds for Kirk Edwards," Richards added. "I guess the young man is not feeling that well. He was just stitting back, waiting on the back foot.

"The flaws in Kirk Edwards's technique... he's looking all over the place. His confidence has been totally destroyed."

Bresnan, who ended the day 3-10 from six overs, told BBC Sport: "To get them six down on that wicket in that little session was fantastic and hats off to everyone - Jimmy and Broady set it up perfectly.

"I learn a lot from everyone, but having Jimmy out there saying this is what it is doing is invaluable."

The 27-year-old Yorkshire all-rounder earlier contributed an unbeaten 39 with the bat, Andrew Strauss having converted his unbeaten 102 into 141 and Kevin Pietersen adding just eight to his overnight 72.

"It was a battling knock which shows what the pitch is like," said Bresnan. "It is quite slow and quite difficult to score on so you've got to bat time."

Bresnan looks set to extend his record to 13 victories from 13 Tests in which he has played.

"It takes a lot to win Test matches," he added. "So far I've been lucky with result. Last week I didn't contribute much but I don't think about it."