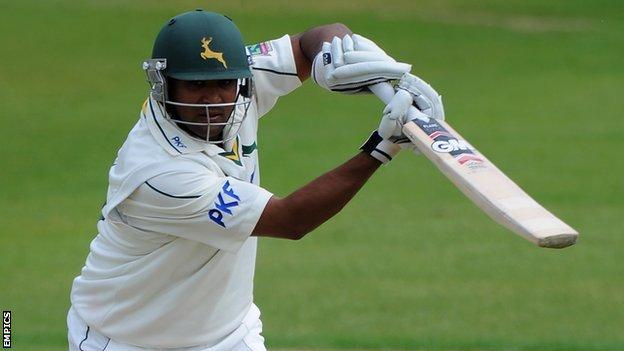 Nottinghamshire completed a seven-wicket victory over Sussex on the final afternoon at Hove to go a point clear at the top of the County Championship.

Sussex began the day on 177-4, a lead of 58, but offered little resistance once overnight pair Murray Goodwin (74) and Luke Wright (55) were parted.

Andre Adams removed both, while Samit Patel also struck twice as the hosts were dismissed for 263.

Patel then hit 50 not out as Notts easily reached their target of 145.

Nottinghamshire's victory, the first in the Championship at Hove since 1983, took them back above Warwickshire at the top of the table, but having played a game more.

They had to wait for their breakthrough as Wright, playing his first County Championship of the summer, completed his second half-century of the match before driving loosely at Adams to be caught behind by the diving Chris Read for 55 to end a stand of 107 for the fifth wicket with Goodwin.

Patel soon dispatched Ben Brown for a duck but it was Adams who claimed the key wicket of Goodwin when the Zimbabwean clipped a length ball straight to Michael Lumb at mid-wicket.

After Patel had also removed Steve Magoffin, James Anyon and Naveed Arif added 32 for the ninth wicket but Carter and Harry Gurney wrapped up the innings after taking the new ball.

Riki Wessels and Alex Hales ensured Notts made a positive start to their run chase but they still needed 55 to win when Monty Panesar removed Lumb lbw to leave them 90-3.

But Patel survived being dropped in the same Arif over by Brown and Michael Yardy to steer the visitors to their target with a boundary that also brought up his 50.

"Ultimately a comfortable win for Nottinghamshire, although Sussex made the new Championship leaders work hard for their victory.

"The decisive phase of this match was the Sussex first innings, when on a good pitch Michael Yardy's side didn't score enough runs, 242-4 becoming 305 all out.

"Riki Wessels' magnificent 199 for Nottinghamshire demonstrated that the pitch was a good one, and from that moment on Sussex were always struggling.

"However Murray Goodwin's welcome return to form in the second innings, coupled with Luke Wright's return to the side, augers well for the rest of the season."

"There was a little more for the Nottinghamshire lads to celebrate than just the victory gained at Hove, as it was the first time that they'd tasted success at the County Ground since the days of Mike Hendrick and Richard Hadlee, who bowled their side to victory in 1983.

"Their modern-day successors turned in a thoroughly professional performance here to clinch a fourth win of the campaign and a spot back on top of the Division One table.

"Riki Wessels' outstanding innings of 199 set up the win, confirmed with a fine last-day performance from Samit Patel, who followed up his seven wickets in the contest with a decisive, unbeaten 50."