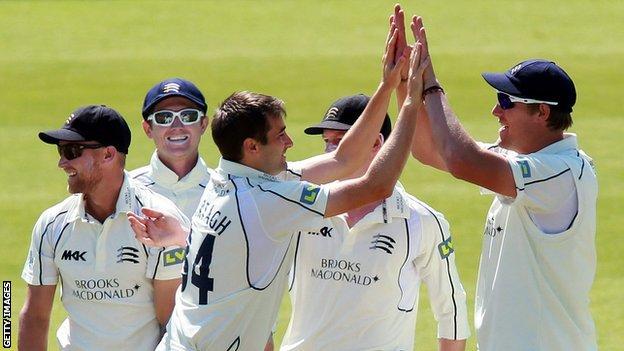 Former Middlesex batsman Ed Joyce fought doggedly for 77 before he was caught behind off Finn.

Ben Brown also fell to the England paceman (3-65) after batting well for 70 and Naved Arif made a useful 38 as Sussex reached 242-8 at the close.

Having elected to bat first, Sussex could have done without losing Nash for a duck to the second ball of the day from Murtagh, which he edged to the keeper.

After losing most of the top order, Joyce took responsibility for overseeing the recovery mission but Luke Wright could only manage 14 and it was not until Brown arrived that Sussex stemmed the flow of wickets.

Together he and Joyce added 81 painstaking runs in 36 overs. However, neither was able to go on and make the major score needed by the south-coast county.

And when Arif was dismissed five overs before stumps, they were left with only two wickets remaining to try and eke out another batting bonus point.

"It was a relatively even first day at Lord's but Middlesex will be disappointed having allowed Sussex to recover from 66-5.

"Tim Murtagh and Steven Finn bowled beautifully in the first hour but the ball and pitch appeared to offer a lot less after lunch.

"Having won the toss, the visitors must have doubted their decision to bat first but former Middlesex batsman Ed Joyce and wicketkeeper Ben Brown staged an admirable and patient fightback to edge towards what is still set to be a below par score."

"That being said, the top order again failed to produce the goods, with Joe Gatting looking out of position at number three, Murray Goodwin missing out again, and Mike Yardy and Luke Wright both guilty of poor shot selection.

"Ed Joyce and Ben Brown both showed they had the stomach for a fight, batting with grit and determination, although ultimately both will be disappointed with soft dismissals having done all the hard work.

"The Middlesex bowlers, particualrly Tim Murtagh, bowled really well on what looks a good batting surface, and Sussex will need to do likewise on day two to stay in with a chance of winning this match."