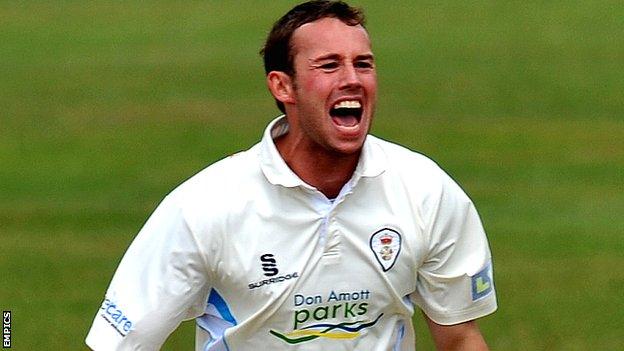 Palladino (3-58) got rid of Michael Thornely, Ned Eckersley and Ramnaresh Sarwan in successive balls to take him to 200 first-class wickets.

The hosts recovered from 7-3 as Matthew Boyce made 50 and Kadeer Ali 48, but Tim Groenewald (5-29) took centre stage as Leicestershire were all out for 177.

The Division Two leaders closed on 5-0 in reply, trailing by 172 runs.

Earlier, Leicestershire lost three wickets with the score on seven, with both Eckersley and Sarwan going for first-ball ducks to complete Palladino's first hat-trick of his career.

Palladino's hat-trick was the first for Derbyshire since Kevin Dean, now on the county's committee, achieved the feat on the same ground 12 years ago.

Kadeer and Nathan Buck then added 58 in 18 overs, but the last three wickets fell for the addition of only eight runs.