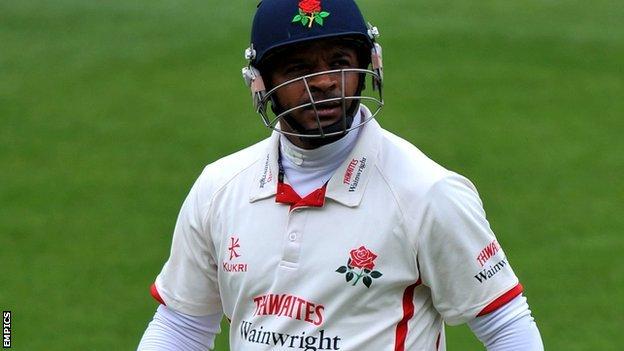 Ashwell Prince hit a half century to lead Lancashire's fightback on a rain-affected first day of their Championship clash against Nottinghamshire at Trent Bridge.

Two early wickets for Andre Adams, who finished the day with 4-77, had the visitors on the back foot at 69-3.

But Prince shared 50 partnerships with Steve Croft (29) and Gareth Cross (35).

But it was Andrew Carter's dismissal of Croft that earned Nottinghamshire skipper Chris Read a place in ther history books as he became only the county's fourth wicket-keeper to pouch 700 first-class victims.

"He will resume with one eye on his second century of the season before breaking for some time off with the family when T20 starts next week.

"Even though the manner of his dismissal might disappoint him Gareth Cross will be pleased with his knock, likewise a fluent 34 from Karl Brown."

"It was clear that a new plan was needed against him and, for a while, Karl Brown cashed in, thumping him for seven boundaries in just three overs.

"But Adams brought his length back a touch and, with the help of some excellent catching, ensured normal service was resumed by taking four of the six wickets to fall."