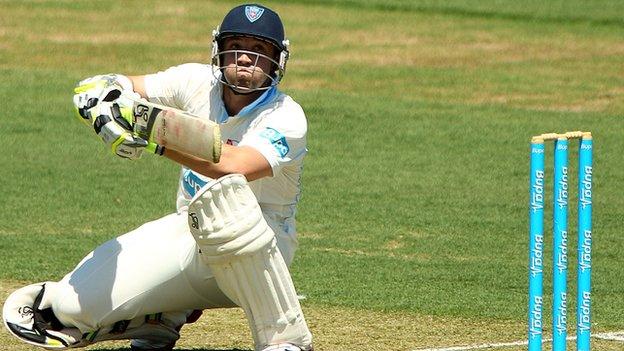 New Australian signing Phil Hughes says he wants to score a "mountain of runs" while with Worcestershire.

After hitting 111 in his first game, Sunday's CB40 win over his old county Middlesex, the left-hander hopes that there are a lot more runs to follow.

"I want to score a mountain of runs and get Worcestershire in position to win," he told BBC Hereford & Worcester.

"It's always good for the confidence scoring runs. I'd just landed and to help the boys to victory is good."

Hughes struggled early on, clearly at times hampered by an ankle injury.

But, once he had found his touch, his century celebration at sun-soaked New Road showed just how much it meant to clock up three figures against his old team-mates.

"I met up with a few of the Middlesex boys the night before," said the 23-year-old New South Wales-born left-hander. "I formed some good friendships and there was a little bit of banter out there, so it was nice to get a few against them.

"But it's always good to get runs. I was just glad to get out there and contribute in what was my first hit for Worcestershire."

Hughes had hoped arrive in time for the start of the season after losing his place in the Australia side over the winter.

He is now looking to replicate the success he had with Middlesex prior to the Ashes series in 2009 rather than the poor form he showed back in England a year later with Hampshire.

"Cricket's a funny game," Hughes added. "You can get some periods when you're hot and some when you miss out.

"But, whereas I've only had short six-week stints before, this is for three and a half months and I'm really looking forward to finishing the whole of the season and building some confidence.

"It's been tough for the boys so far but it's a long season, we've still got 10 four-day games to go and it can turn round very quickly."

Hughes is aware that a repeat of the form he showed with Middlesex in 2009 three years ago might not go unnoticed, especially with Australia's one-day party due to fly in for a short series next month.

But, in reality, he is concentrating only on getting runs for Worcestershire - starting with Wednesday's home Championship date with Somerset - as he attempts to help steer Steve Rhodes' side away from relegation danger.

"To get picked in teams is about the volume of runs and how you scored them," he said.

"At the end of the summer, it will be back to Australia and starting the season with New South Wales, but I'm not looking that far ahead. I've just got to worry about playing for Worcestershire first."