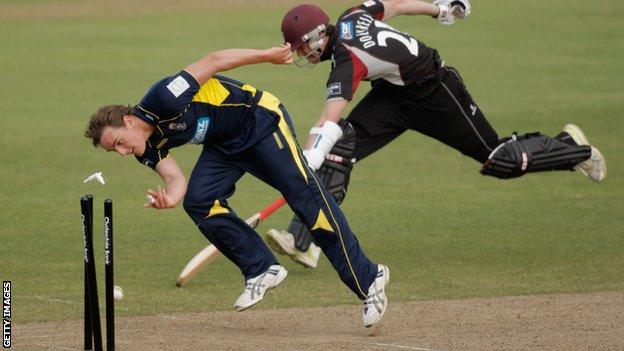 Coach Andy Hurry says Somerset's batsman must be accountable for their poor performances in the CB40.

Last year's runners-up suffered a nine-wicket defeat by Hampshire on Sunday, leaving them without a win in the competition this season.

Craig Kieswetter, James Hildreth and Peter Trego all went for single figures as Somerset limped to 212-9, a target Hants reached with 11 overs to spare.

Hurry told BBC Somerset: "The top four guys have got to take responsibility."

He continued: "We've played three games of Pro40 and during that time three out of the four have amassed 54 runs.

"If you lose three wickets in the first eight overs it makes it a difficult task.

"It's not acceptable. We're all about getting runs on the board early doors, batters making big scores and bowling in good areas.

"Today, in all areas, we were very poor."

The home defeat by Hampshire comes after losses against Durham and Surrey, and Somerset now have an uphill task to reach the semi-finals this term.

Despite his criticisms, Hurry believes they his side can turn their form around.

"We accept the fact it hasn't gone well," he said. "A number of people haven't come to the party yet but it's about time and working with them - to keep encouraging them.

"We've had some young players in the first couple of games. We've seen some really encouraging signs and we've got to keep backing these guys and nurturing them through,

"There's still a lot of cricket to be played in this competition but we need to get a win. There's no excuses. We had a good opportunity to show the home crowd what we were about and we failed.

"Now we go on to Trent Bridge to make sure we get that win."