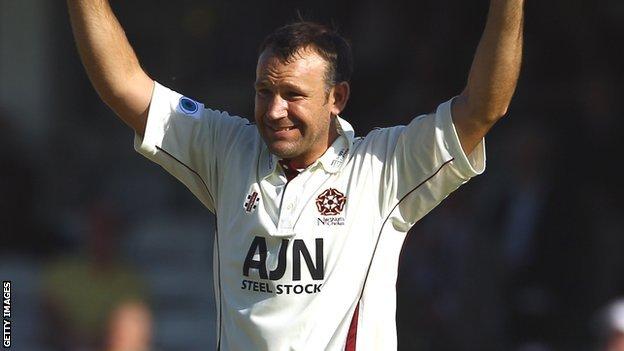 Hall told BBC Northampton: "It's not every day a player gets a 100 and a five-for, especially a spin bowler.

"There wasn't consistent turn in the pitch, which made his job all the more difficult. He knows he's played exceptionally well."

Middlebrook opened the batting in the County Championship match after Rob Newton suffered a fractured wrist against Kent, and his 121 was his eighth first-class century.

"It's great to have people like that in the team," added Hall.

"It makes it a lot easier for me. It allows me to play a second spinner and gives me more options in the bowling line-up."

Ex-Essex and Yorkshire player Middlebrook has been keen to take on the responsibility of batting at the top of the order.

"In my appraisals, I've told the captain and coach that if there's ever an opportunity, I'd like to do it," said Middlebrook.

"After the unfortunate incident with Rob, the captain told me I'd be doing it for the next game and maybe the next two Championship games. I've taken that challenge and am trying to do the best I can."

While Hall has been delighted with the improved performances in the County Championship, with two victories and three draws from their last five matches, he admits they need to quickly improve their form in limited-overs cricket.

Northants are yet to win in their CB40 campaign so far, and the Twenty20 starts in just over two week's time.

"Guys are starting to get into [good] batting form," said Hall.

"But the one-day cricket form is concerning. We haven't had the time to do long days of one-day format practice.

"It's something we have addressed and we'll have to make some plans to get one-day format practice, maybe even during Championship games. We haven't clicked in that format yet."