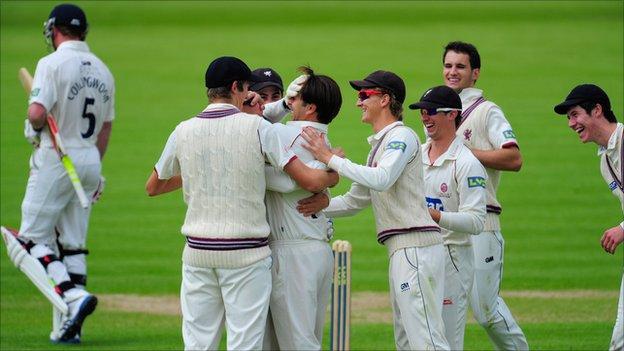 Durham head coach Geoff Cook has told his players the time for excuses is over, with the county still awaiting a maiden Championship win in 2012.

Poor weather and difficult pitches had hampered Cook's side earlier this term, but Durham failed to build on excellent conditions in the defeat by Somerset.

"We're running out of reasons not to play well," Cook told BBC Newcastle.

"Wickets are getting better, we've had sunshine, so we've got to buckle down and play some good cricket."

He added: "We need to do it for four days rather than the odd session."

Following a close-fought battle for the Division One title last season with eventual winners Lancashire, Cook's squad ended the season in third place.

However the county currently find themselves bottom of the division, nine points behind the reigning champions who they begin a four-day fixture with at Chester-le-Street on Wednesday.

"There are 10 games to go yet, that's the vast majority of the season," Cook added.

"If we keep getting in winning situations, hopefully we'll have the firepower and the determination to capitalise.

"In cricket it's important you don't look too far ahead, with the old cliche of it's the next session or next ball and the Lancashire game is an important one."