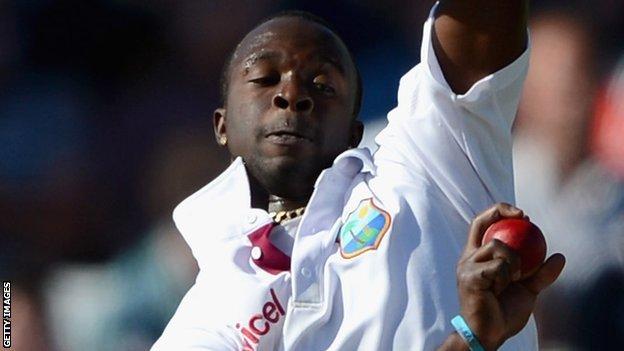 The 23-year-old Roach had been ruled out of the rest of their England tour with a shin problem.

Narine is yet another replacement player for the West Indies, with Tino Best having been called up already to replace injured Shannon Gabriel.

Coach Ottis Gibson said of Roach: "He has been outstanding with the ball...we are all gutted by his departure."

West Indies have already lost the three-Test series 2-0 with one to play, and Roach has been the pick of the visitors' bowlers across both Tests with eight wickets for 258 runs in four innings.

In the first two Tests, Roach took eight wickets at an average of 34.25.

West Indies team physiotherapist CJ Clark told the West Indies board's website: "Kemar has been carrying this soreness for the last two matches and, in view of our upcoming schedule, we would like him to have the time to recover and prevent the onset of more serious injury.

"It is always important to balance workload with the body's ability to repair and I think it judicious to protect Kemar at this time."

Roach did not travel with the rest of the squad on Wednesday to Leicester, where West Indies face Leicestershire in a two-day match at Grace Road that starts on Saturday. He returned to London before departing for home.

His replacement, off-spinner Narine, is untested in Test match cricket.

However, he joins the West Indies squad off the back of an excellent Indian Premier League, in which his variations and wicket-taking ability caught they eye as his team, the Kolkata Knight Riders, won the tournament on 27 May.

Narine attracted a winning bid of £450,000 at the IPL auction in February, and went on to claim the Golden Player of the Season accolade for impressive figures of 24 wickets at an average of 13.50 and an economy rate of 5.47.