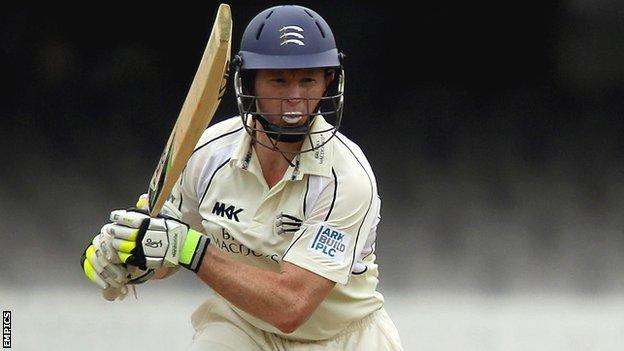 Middlesex opener Chris Rogers hit an unbeaten 93 to lay the foundation for a first-innings lead on day two against Sussex at Lord's.

The Australian left-hander shared a stand of 145 with Joe Denly (67) in over four hours of patient batting.

Eoin Morgan made a welcome return to form with 52 as he and Rogers added 77 to see Middlesex to 229-3 at stumps.

Earlier, Sussex were all out for 283, adding only 41 to their overnight total, as Tim Murtagh claimed 5-55.

However, it did represent a good recovery by the visitors, who had been 33-4 at one stage on the opening day, with Steve Magoffin and James Anyon securing a second batting point after a stand of 36.

Magoffin then trapped Middlesex opener Sam Robson lbw for a duck but Anyon was let down by his fielders as Joe Gatting and Ed Joyce both dropped Denly in the slips.

The former Kent batsman made them pay with an 85-ball half century and it was spinner Monty Panesar who finally brought his innings to an end just before tea when Denly offered no shot to was adjudged leg-before.

Dawid Malan went three balls later to the persevering Anyon but Rogers continued ser4enely towards a second successive Championship century and Morgan lifted his spirits after a frustrating spell in the Indian Premier League with six boundaries and a six off Panesar.

"Having survived a troubled spell against the new ball, Middlesex will be confident of building a sizeable first innings advantage.

"Sussex will be delighted with their recovery from 66-5 to 283 all out but it remains a below-par total.

"As was the case on the opening morning, there was a lively start to the Middlesex innings with the new ball but once the early threat had settled the set batsman looked in control.

"Chris Rogers in particular showed a steely determination to see past the opening burst to cash in on the runs and could be rewarded with centuries in consecutive first-class innings."

"Having been 66-5 yesterday morning, Sussex will have been delighted to post a total of 283.

"However the comparative ease with which the Sussex lower order batted suggested that this is a very good batting surface, and the Middlesex reply has confirmed that as fact.

"Credit Sussex who have stuck to their task, James Anyon in particular deserved better from a hostile spell just before lunch, but dropped catches cost them dear, and they now face an uphill battle to win this game.

"Final word for Steve Magoffin, the amiable 32-year-old Australian has never played at Lord's, but claimed the wicket of Sam Robson in his very first over."