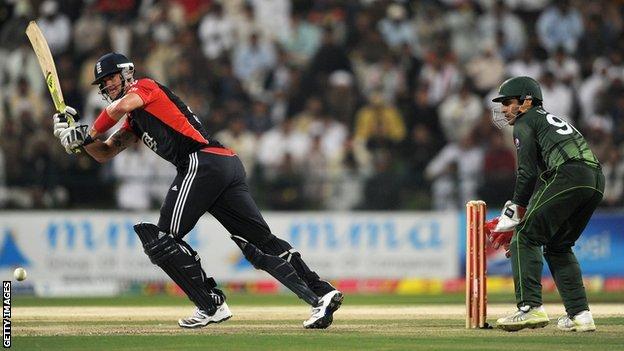 "I think it is the right time to step aside and let the next generation of players come through to gain experience for the World Cup in 2015," he said.

"I still wish to be considered for selection for England in Test cricket."

"His decision is not out of the blue - there have been rumours he has been thinking for a while - but the timing is surprising. ODI and T20 format cricket are linked and that is why ECB is disappointed with timing. It would have hoped he kept going until the Twenty20 World Cup in September because he would have been very much a part of their plans, but this decision rules him out of that."

Pietersen, who was player of the tournament in England's World Twenty20 triumph in the Caribbean in 2010 with 248 runs in six matches at an average of 62, had been expected to be at the forefront of the side again during this year's competition, which takes place in Sri Lanka from 18 September to 7 October.

But it has emerged that the ECB does not allow players to pick and choose between ODI and Twenty20 formats.

Pietersen said: "For the record, were the selection criteria not in place, I would have readily played for England in the upcoming ICC World Twenty20."

Hugh Morris, managing director of England Cricket, said the ECB was disappointed with the timing of Pietersen's decision, coming four months before the World T20.

"As the programming and planning for ODI and T20 format cricket are very closely linked, we have a selection policy that means that any player making himself unavailable for either of the one-day formats, rules himself out of consideration for both formats," he said.

"The selectors will now replace Kevin in both the ODI and the T20 squads.

"Kevin is a world-class player and I would like to take this opportunity to thank him for his efforts and we look forward to his continued contributions to the Test match side."

Andrew Strauss was the last senior player to retire from ODI cricket, although he was not part of the Twenty20 set-up.

In an interview with BBC Sport late last year, England spinner Graeme Swann said the 50-over international format should be scrapped.

Pietersen said he had considered the "intensity of the international schedule and the increasing demands on my body, approaching 32".

South Africa-born Pietersen, who has an English mother, has been one of the most successful England batsmen of recent times since he qualified to play international cricket by serving four years in the county game.

His 4,184 one-day international runs at an average of 48.14, puts him sixth in the all-time list of England batsmen, and he heads their T20 list with 1,176 runs at 37.93, the only England player to pass four figures in the shortest form of the game.

Pietersen's relationship with the ECB, which came under scrutiny when he resigned as England captain in January 2009 following a rift with then coach Peter Moores, was tested again this month after he was fined for criticising commentator Nick Knight on Twitter.

He scored 111 not out and 130 in his final two one-day innings, against Pakistan in Dubai in February.