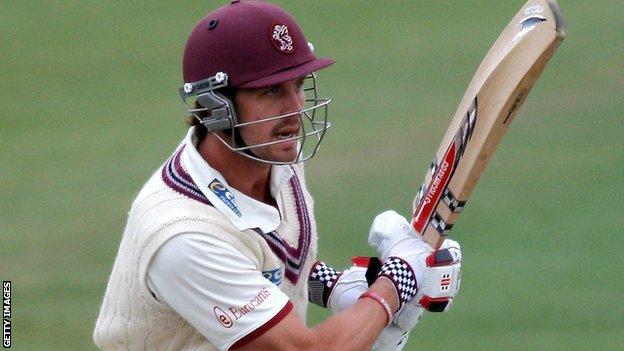 to become the first man to achieve the feat before the end of May since Graeme Hick in 1988.

Compton reached 1,000 runs when he dabbed a ball from Gareth Andrew towards third man to take him to 59.

The 28-year-old became the quickest man to achieve the milestone since Hick 24 years ago, although Kent batsman Rob Key reached four figures on 2 June in 2004.

Compton then went on to amass his third ton of the first-class season and the 15th of his career, but lost his wicket to Shantry four balls before bad light brought an early end to the day's play.

His knock came at a good time for Somerset who had slipped to 86-4, despite James Hildreth's 52.

Buttler and Compton put on 167 for the fifth wicket, before Buttler's near two-hour innings was ended by Moeen Ali.

Shantry then struck twice in seven deliveries with the new ball to leave Somerset 63 behind, but a draw is still the most likely result with a day remaining.

"An excellent day for Compton, who was robbed of the chance of 1,000 runs by the rain on Thursday.

"He ground though the pre-lunch session but opened up in the afternoon, and with Buttler negated Shantry's fine spell of the morning session.

"Shantry has looked by far the more controlled of the Worcestershire attack.

"I am not sure what constitutes bad light these days, and with all due respect Shantry and Lucas are not the fastest attack in the country, but there were puzzled faces when the last 26 overs of the day were lost.

"There will have to be some collusion one would think to get what is known as a positive result from this."