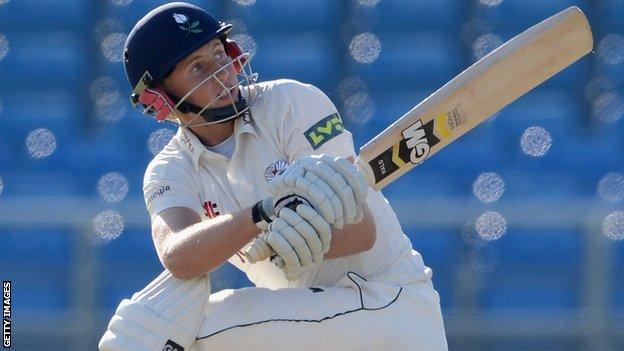 Joe Root scored his first century of the season to leave Yorkshire pushing for a victory against Northants.

Yorkshire resumed on 190-3 and Root, 98 not out overnight, was dismissed for 125, while Jonny Bairstow scored 68 on his county return after England duty.

Yorkshire, fourth in the table before this round of matches, will be aiming to claim the victory on Saturday to move up to second in Division Two.

League leaders Derbyshire suffered a heavy defeat at Gloucestershire, while Kent and Hampshire, second and third respectively, are without a Championship game this week to give Yorkshire a glorious chance to boost their promotion hopes.

At the start of the day, Yorkshire trailed by 63 runs but their batsmen produced a dominant performance to take charge of the match.

Root, 21, reached three figures for only the third time in first-class cricket. He and Bairstow added 147 for the fourth-wicket as the match slipped out of Northants' grasp.

Bairstow, who earlier this week was described as a player with "star quality" by Yorkshire president Geoff Boycott, quickly returned to form after struggling for England last week against the West Indies.