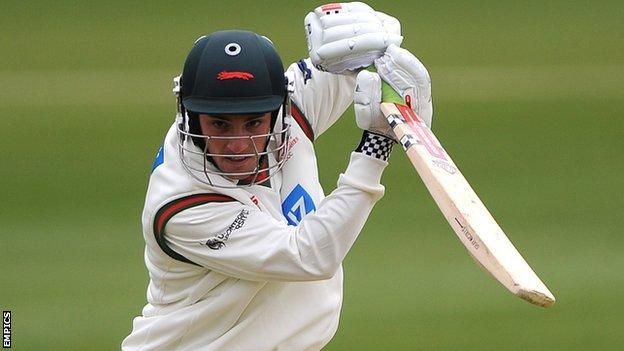 Ned Eckersley and Michael Thornely hit career-best centuries as Leicestershire dug in to draw with Glamorgan.

The visitors began the final day on 84-1 with a deficit of 203 after following on, and had reached 316-2 when the captains shook hands on a draw.

Thornely (131) complied a first-class ton on his debut, while Eckersley ended unbeaten on 137, as the pair put on 245 for the second wicket.

Glamorgan used 10 bowlers, with the only wicket falling to Jim Allenby.

The hosts, without a win in their eight matches this season, remain bottom, while Leicestershire stay one place above in eighth but move on to 51 points.

Edward Bevan, BBC Radio Wales cricket correspondent: "On a dead pitch, where the likes of Glenn McGrath, Jim Anderson and Shane Warne might have struggled to take wickets, a total of 874 runs where scored in the final two innings for the loss of only 12 wickets.

"The England and Wales Cricket Board directive is for pitches to have pace over the first three days and some turn for the final day. This had neither and denied either side a chance of victory.

"A draw was always the likely outcome, but it made for dreary watching and a poor advertisement for four day cricket."