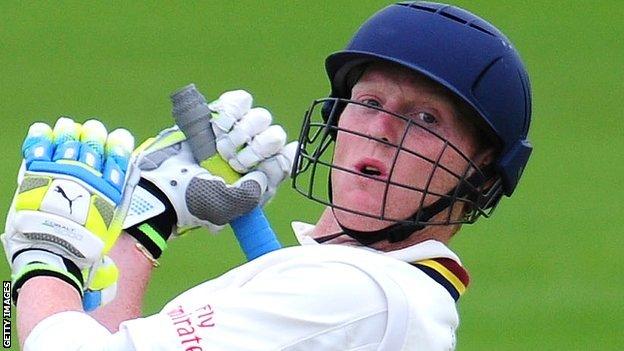 Reigning champions Lancashire need another 144 runs to beat Durham and secure their first win of the season.

But from 203-4, Durham were dismissed for 267 with Luke Procter and Simon Kerrigan both taking three wickets.

Lancashire lost Paul Horton, lbw to Graeme Onions, to the first ball of their reply but closed on 56-1.

Earlier in the day, Will Smith and Mark Stoneman put on 53 for the first wicket but the dismissal of Smith for 22 sparked the loss of four wickets for only 18 runs.

Glen Chapple (2-56) got rid of Gordon Muchall and Dale Benkenstein for single-figure scores to bring Stokes and Collingwood together.

Stokes scored his first ton for a year, while Collingwood made his first half-century of the season, as the duo put on the first 50 partnership of the game.

Collingwood's dismissal to Kyle Hogg began Durham's collapse as the last six wickets fell for the addition of only 64 runs.

After losing first-innings top scorer Horton first ball, Stephen Moore (23 not out) and Karl Brown (30 not out) saw Lancashire safely through to the close.

"At lunch on day three Durham were 71-4 and staring into the abyss with a lead of just three, but Paul Collingwood and Ben Stokes dug in, virtually trebling the previous best partnership in the match.

"It was Stokes's first century since he scored 185 here a year ago against the same opposition in the game where he also smashed his finger.

"Lancashire were set a target of 200 to win, and with no time restrictions and better weather expected on the final day, they must be favourites to go on and win this and claim their first victory of the season, while worsening Durham's relegation fears."

"Either side of the rain falling on day two we've seen some excellent cricket. Lancashire's morning session today [Friday] was outstanding - they had Durham at 71-4 and lunch came at the worst possible time.

"The home side were lucky to be only four down at the interval because Lancashire were brilliant with the ball. Likewise with the bat were Paul Collingwood and Ben Stokes. A superb ton by Stokes has set up an intriguing final day.