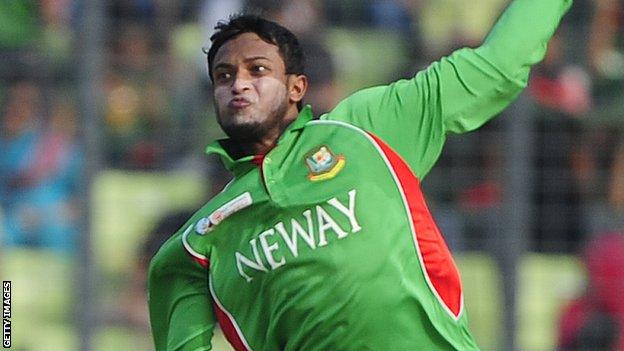 Essex's problems with overseas players have continued after they missed out on Bangladesh all-rounder Shakib Al Hasan.

Head coach Paul Grayson has said a deal had been struck with Shakib, the world's top one-day all-rounder.

But Bangladesh have opted to not release their former captain, preferring to take him on the upcoming tours of Zimbabwe and South Africa.

It's very disappointing. He is the number one all-rounder in the world, and he ticks a lot of boxes for us

Seamer Siddle was ruled out of Grayson's T20 plans with a back problem.

And South African Petersen finished his early-season spell at the club, designed to prepare him for English conditions ahead of his country's tour in July, with a County Championship average of 21.36.

Grayson has been frustrated in his latest attempt to bolster his overseas options, with the hope of halting a five-game winless run in all competitions.

He told ESPN cricinfo: "Shakib had accepted an offer to play for us. The deal was agreed upon. We were hoping he would play Twenty20, CB40 and some championship games, and that he would stay with us until the back end of August.

"It's very disappointing. He is the number one all-rounder in the world, and he ticks a lot of boxes for us.

"Now we have found out that the BCB [Bangladesh Cricket Board] have not agreed to give him a no-objection certificate. They are trying to arrange a few things and they don't want to let him go."