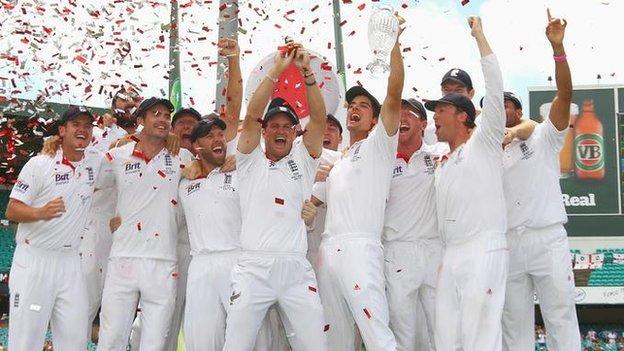 England will begin the defence of the Ashes at Trent Bridge in July 2013.

The opening game of the five-match series begins on 10 July with the second Test at Lord's next up from 18 July.

Test cricket returns to Old Trafford for the third Test from 1 August while Durham hosts the penultimate match from 9 August.

The series will end from 21 August at The Oval, where England have clinched the urn for the last two home series.

It will be another busy summer for England with a series against New Zealand in all three formats between 16 May and 27 June while the world's top eight teams will also contest the Champions Trophy at The Kia Oval, Cardiff and Edgbaston during June.

As well as the Test series, Australia will play two four-day warm-ups against Somerset and Worcestershire and further games against Sussex at Hove and Northampton.

They will also face England in two Twenty20s and five one-day matches.

England and Wales Cricket Board chief executive David Collier confirmed that a compromise deal has been reached which sees Glamorgan trade their Test for the Champions Trophy fixtures.

Cardiff was originally scheduled to host the first Test of next summer against New Zealand but ticket sales for last summer's Test against Sri Lanka were disappointing and following discussions between the ECB, Glamorgan and the MCC, a decision has been reached.

Collier said: "Wales has earned an outstanding reputation for its ability to deliver world-class sporting events and we are delighted that Cardiff will be used as a host venue for the ICC Champions Trophy and stage a semi-final."

[T20 tour match at Canterbury on 22 June cancelled if NZ in final of ICC Champions Trophy].