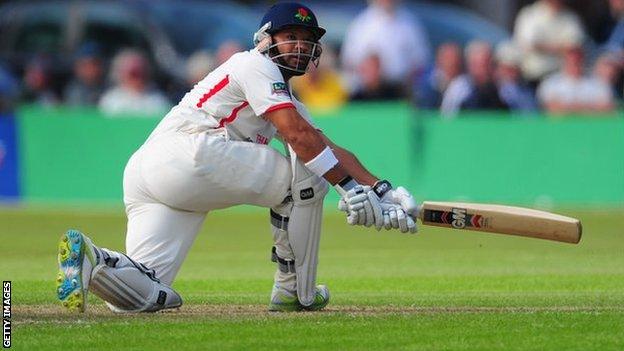 Durham paceman Graham Onions boosted his England chances with a career best 11-wicket haul but could not prevent Lancashire recording their first win of the season on a rain-delayed final day.

Resuming on 56-1, Karl Brown made 42 before being trapped lbw by Onions to leave the visitors needing 119 to win.

Ashwell Prince passed 50 but Lancashire lost four wickets for only 12 runs to leave them on 168-8, still needing 31.

But Ajmal Shazad and Kyle Hogg saw the visitors home with four balls to spare.

Durham, who are bottom of Division One, are yet to win this season and will also have points deducted for a slow over-rate.

And Onions will feel aggrieved at ending on the losing side, having recorded career-best figures of 11-95 against last season's county champions to further enhance his international credentials, with England deciding to rest paceman Jimmy Anderson for the third Test against West Indies.

Rain had delayed the start of day four until 14:55 BST, but that was still enough time for Lancashire to secure an overdue opening win, leaving 44 overs to score 144 runs.

Onions produced a superb 11-over spell, either side of tea, to take 3-12 and when he was rested with the visitors 108-4, he had taken all of the wickets to fall.

With Onions temporarily out of the way Lancashire burst into life with 20 runs coming off two overs after only 52 had come off the opening 22 overs of the day.

Luke Procter helped Prince (51) put on 58 before two wickets from Jamie Harrison and a fifth from Onions set up a nervy finish.

However, after the former England bowler had claimed his 11th victim of the match, Shazad and Hogg scored the vital runs to secure victory for Lancashire.

"The smell of relegation hangs in the air over Chester-le-Street. Although Durham have already lost 13 and a half days to the weather, which hasn't helped things, they are now without a win in seven and with nearly half of the season gone. And it's fair to say in most of the games where the weather has interevened they weren't in winning positions anyway.

"Losing to Lancashire like this was hard to take. The fact it went down to the final over was amazing and in the main part credit to the tenacity and fierce bowling of Graham Onions.

"Ajmal Shahzad proved the hero for Lancashire as he struck the winning runs but evidence reveals he was run out with 13 still needed. As the stumps broke he was in the air but umpire Rob Bailey wasn't in the best position to see it and gave him not out, much to the disbelief of the Durham players.

"When you are down on your luck issues like this can make all of the difference, but the fact is Durham's batting has been woefully inadequate and if they go down at the end of the season, which at this moment in time looks very likely, that will be the reason why.

"You have to hand it to Graham Onions though, another 11 wickets in this one, but he's now likely to get taken away again by England again, just as Durham need him most."

"The weather has been awful and we haven't played great stuff this season, but those who hung around were treated to a fantastic finale.

"We played some brilliant cricket - after the end of our first innings - but unfortunately on the last day the rain reduced the overs and the conditions and the chemistry of the match altered massively.

"If Graham Onions gets called up by England he deserves it. He's bowled some top stuff but if he does go then the other lads have to come to the party and show what they can do.

"The baffling side of this season has been our batting. They have been bowler friendly conditions so far. Only two batting points have been possible here this season. Confidence is low at the moment but we just have to work like mad to make sure we get some time at the wicket for everybody.

"There's obviously disappointment but no-one is talking about relegation. If you get two or three wins then the season looks completely different."