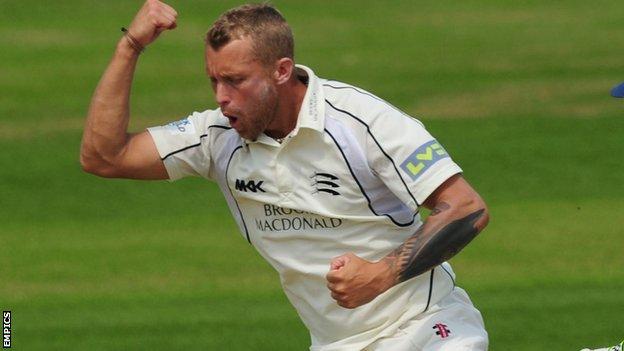 Resuming their second innings on 34-1, 174 runs behind, Ben Brown hit a half-century as Sussex were all out for 225.

Berg ended with 3-53 while Steve Finn, who dismissed Ed Joyce before the close on Friday, also completed a second-innings three-wicket haul.

Finn followed his three first-innings wickets with 3-66 in the second to take his total in the match to six.

Middlesex were looking like they would complete an early victory, with Sussex 101-5 before lunch, still 126 runs behind.

Brown's second half-century of the match delayed the hosts' celebrations, who were set a target of 18, which they reached 40 minutes after tea.

"We lost the toss under clear blue skies and bowled them out for 283 and then hit nearly 500 under cloudy skies, it was a pretty complete performance.

"The pitch didn't change too much throughout the match but our attack always put their hand up. There was still work to do when they got 280. Up front with the new ball was dangerous in all innings.

"It's great to have Chris Rogers back in form, he started uncharacteristacally out of form for us. He batted all day at Liverpool to save the game and the one here was just as good, he was unlucky not to get a hundred."