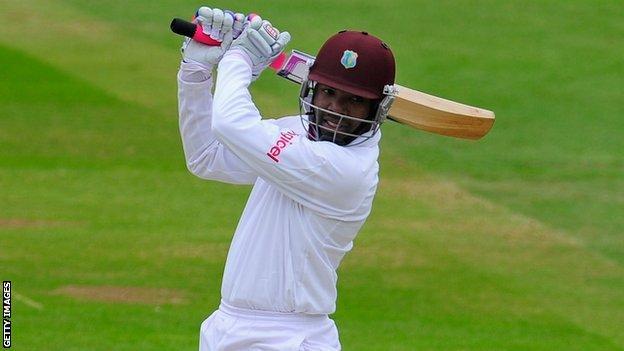 Darren Bravo and Adrian Barath made half-centuries, but the rest of the West Indies top order struggled on day one against Leicestershire.

Home seamer dismissed out-of-form pair Kieran Powell and Kirk Edwards in the same over before Barath and Bravo shared a third-wicket stand of 111.

They were parted when Bravo was bowled by the left-arm seam of Rob Taylor for 66.

Barath was on 53 when bad light forced the close with the Windies 150-3.

Although the weather delayed play by half an hour on the first morning of this two-day match, Edwards, captaining in place of the rested Darren Sammy opted to bat on winning the toss in order to give the tourists some much-needed time in the middle.

He came to the crease after Powell edged Malik's first delivery to wicketkeeper Ned Eckersley.

But Edwards, who has registered four ducks in eight innings on the tour so far and managed only 20 runs in total, continued to struggle as he was pinned lbw by a ball of full length.

Barath and Bravo, cautiously at first, repaired the damage, before Bravo in particular began to show some fluency.

A huge Bravo six off left-arm spinner James Sykes brought up the century partnership, but when the left-hander aimed another drive at Taylor, the stand was ended, leaving Assad Fudadin to accompany Barath to the close.