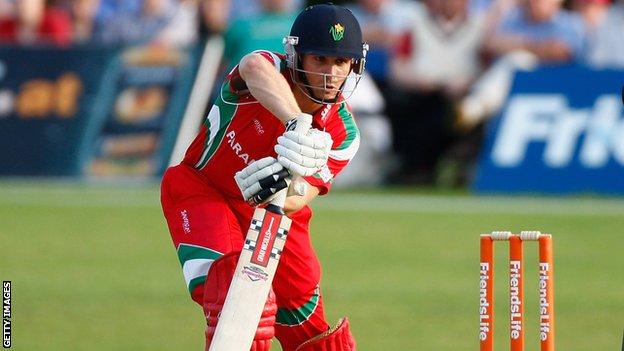 Mark Wallace has issued a warning to his Glamorgan side that they need to start winning after defeat to Surrey in the Clydesdale Bank 40.

The Glamorgan captain and his side are still looking for their first victory of the season.

The latest defeat came when Surrey overcame the Welsh county by 57 runs under the Duckworth/Lewis Method at the Swalec Stadium.

This was Glamorgan's seventh defeat in 10 completed games in all competitions so far this season.

Half centuries from Steve Davies (58) and Zander de Bruyn (52) drove Surrey to a convincing victory with the visitors reaching 173-9 in their 40 overs.

Jim Allenby (28) was the hosts' top scorer out of a score of 109-9 before rain brought the Duckworth/Lewis method into play with 14 overs remaining.

Martin van Jaarsveld fell lbw to Jon Lewis for 10 on his Glamorgan debut.

But Wallace is confident the Dragons have the quality in their squad to make a real impression in this season's 40 over tournament.

"It still is early days but there is still plenty of cricket left in this competition," said Wallace.

"It is a strong Group but being in a strong Group can help you. Every side can beat each other and that means there are opportunities and games still there to put a marker down."

Wallace highlighted the performances of Allenby and Dean Cosker but was frustrated his side could not deliver victory on home turf.

"Jim Allenby was outstanding, along with Dean Cosker, and we were very happy to hold them to that score at half-time," said Wallace.

"They got us under the pump quite early and we couldn't manage to pull it back.

"They are a good side and have international quality in their ranks, but we were in a position to beat them and that is the standard we want to get to.

"We have players here who should be aspiring to play international cricket and to be able to perform against these guys."

That is followed on Sunday by a CB 40 match against Durham at the same ground.