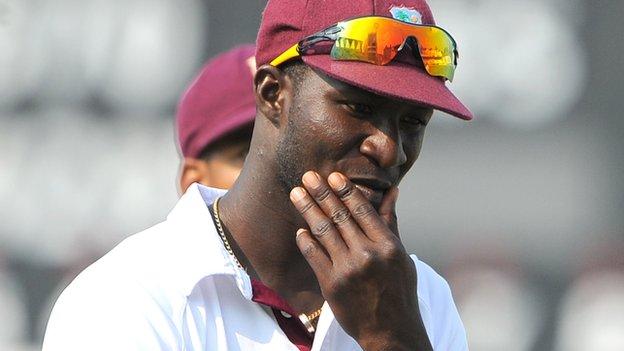 West Indies were frustrated by the rain as the second day of their tour match against Leicestershire was abandoned without a ball being bowled.

The weather allowed only 50 overs of play on day one, with the Windies moving to 150-3.

Further overnight rain then caused Sunday's play to be called off 30 minutes before the scheduled start.

The tourists, 2-0 down in the Test series with England, begin the final match at Edgbaston on Thursday.

Coach Ottis Gibson and captain Darren Sammy must decide who to bring in for pace bowler Kemar Roach, who has returned home because of a shin injury.

Spinner Sunil Narine is due to arrive after completing his Indian Premier League commitments, and could play at Edgbaston.

The Windies also have concerns over their top order, after Kieran Powell and Kirk Edwards both failed on day one.

Opener Powell's top score in his four Test innings so far is 33, while Edwards has failed to reach double figures in any of his eight innings on the tour.