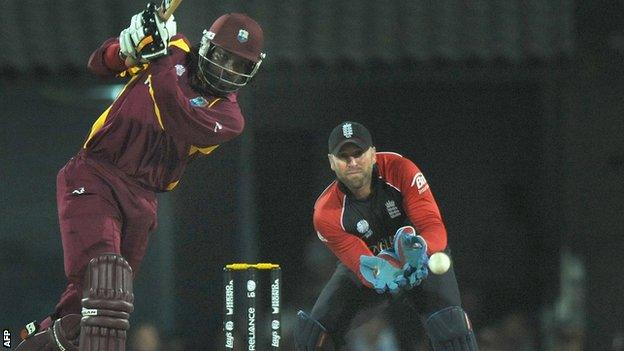 Chris Gayle will play international cricket for the first time in 14 months after being recalled by West Indies for the one-day series against England.

The 32-year-old former captain has been out of the team following a dispute with the West Indies Cricket Board.

Dwayne Bravo returns as vice-captain, while all-rounder Kieron Pollard and spinner Sunil Narine are also included in the 15-man squad.

The three-match series begins at Hampshire's Ageas Bowl on 16 June.

Gayle, the fourth highest-scoring West Indies batsman in ODI cricket with 8,087 runs at an average of 39.06 from 228 matches, has not played for his country since the World Cup quarter-final defeat by Pakistan in March 2011.

The cavalier left-hander, who was involved in contract disputes with the WICB in 2009, when much of the team took strike action, was left out of the team for a series with Pakistan soon after the 2011 World Cup defeat and was highly critical of the WICB and coach Ottis Gibson in a radio interview.

During his absence he played in Twenty20 tournaments across the world and was the leading scorer in this year's Indian Premier League with 733 runs, including a fine 128 from 62 balls.

Clyde Butts, chairman of the selection panel, said: "Chris is a player of proven quality and we are looking forward to him adding this dimension to the side and his contributions as a senior member of the squad."

Shivnarine Chanderpaul, the number one-ranked batsman in Test cricket, has been overlooked along with openers Adrian Barath and Kieron Powell, who struggled in the first two Tests.

Narine, a 24-year-old off-spinner from Trinidad who has taken 14 wickets in eight ODIs, was the second leading wicket-taker in the IPL with 24 victims at 13.50 apiece. He also boasted the second lowest economy rate in the competition.

Butts added: "There is a balanced combination of young rising players like Sunil Narine in the bowling department and Johnson Charles in the top order of the batting - in addition to the well known seasoned internationals."

West Indies lost the first two Tests - and the series - against England, with the final match at Edgbaston starting on Thursday.