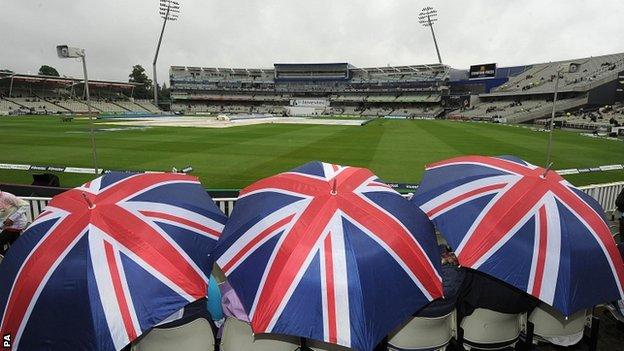 Day one of the third Test between England and West Indies at Edgbaston was abandoned without a ball being bowled because of heavy rain.

Umpires Kumar Dharmasena and Tony Hill made the inevitable call that no play would be possible at 15:35 BST.

England are looking to seal a 3-0 series sweep but their chances could be hit by further rain on Friday.

It is the first full Test match day to be washed out in England since the 2009 Ashes, at the same venue.

Two years previously, against West Indies at Chester-le-Street, was the last occasion no play was possible on day one of any home Test in this country.

It's not looking particularly good for Friday either, we have an even worse forecast with the winds stronger and heavier rains. The weekend forecast is a bit more encouraging, with dry weather with potentially just a few showers."

Should there be a second successive washout at the start of this match, it will be the first time in England since 1964 - against Australia, at Lord's.

But West Indies batsman Shivnarine Chanderpaul is doubtful after undergoing a scan on a side injury on Thursday.

Chanderpaul, the world's top-ranked batsman, scored 87 not out and 91 in the first Test at Lord's and is the key player in an experienced side.

"Shiv went to hospital for a scan," a West Indies team spokesman said. "A day off gives him a chance to see how he goes."

West Indies captain Darren Sammy hinted on Wednesday that one of the two reserve batsmen, Assad Fudadin or Narsingh Deonarine, could come in if Chanderpaul's injury failed to heal.

England lead the series 2-0 after victories at Lord's and Trent Bridge.

Spectators will be entitled to a full refund on their tickets from day one.