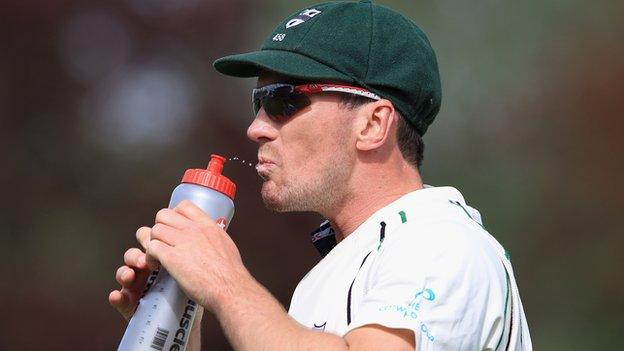 Worcestershire paceman Jack Shantry will play for Shropshire in Wednesday night's Twenty20 friendly on his home town ground at Shrewsbury.

The Shropshire-born left-armer was already looking forward to returning to London Road as part of Worcestershire's warm-up for this year's FL t20.

But Worcestershire coach Steve Rhodes has now allowed him to swap teams.

"He wants a look at a few other bowlers ahead of our first game on Friday night against Warwickshire," said Shantry.

"And it's a good opportunity to come back to my roots and play with my friends.

"It was actually Steve Rhodes' idea. And I'm really looking forward to it.

"Shrewsbury and Worcestershire are the two clubs I hold closest to my heart," added Shantry, who played alongside England goalkeeper Joe Hart for Shrewsbury in his youth.

"There will be lots of familiar faces and it's sure to evoke many fond memories."

Jack Shantry never lets you down, whether it's one-day, four-day or T20. He's a very determined character

Ahead of Wednesday's game, which starts at 17:30 BST, Rhodes is clearly pleased with the 24-year-old's progress this summer.

"Jack never lets you down, whether it's one-day, four-day or T20," Rhodes told BBC Hereford & Worcester. "He's a very determined character, whose strength is that he bowls good line and length.

"He's not the quickest in the world but he's got enough pace for county cricket and has that control.

"He's quite unique with his action which makes him different and I like those skills."

Having claimed 14 Championship wickets in seven matches last season, Shantry has already picked up nine scalps in his two appearances so far this summer.

And, after taking 4-32 in the CB40 win over Middlesex, he followed up with 3-26 in Friday's nine-wicket routing of the Netherlands in The Hague.

Gareth Andrew (3-9), skipper Daryl Mitchell (2-10) and David Lucas (2-11) were the other wicket takers as the Dutch, victors over Worcestershire at New Road a month ago, were bowled out for 57.

Former skipper Vikram Solanki then hit an unbeaten 39 as Worcestershire reached their target in the 14th over.

But, despite Shantry taking 4-37, Worcestershire then fell to an 109-run home defeat by Gloucestershire on Sunday.

Weather permitting, Worcestershire are due to kick off their T20 campaign with the first of their two Bears-Pears derbies at Edgbaston on Friday night (15 June, 17:10 BST).