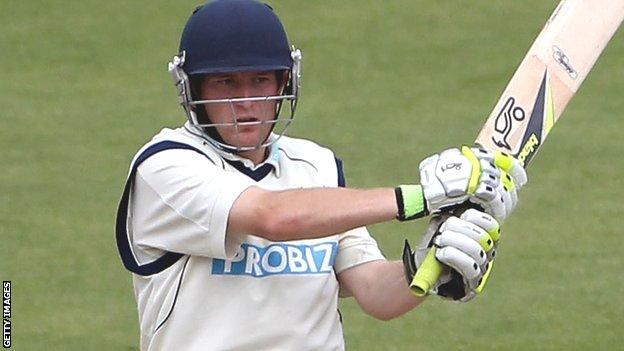 Hampshire's Liam Dawson made his first century of the season on day three of his side's rain-hit match against Kent.

After only 33.4 overs had been bowled in the first two days, Dawson, who began his innings on Wednesday, moved from 22 overnight to an unbeaten 111.

Simon Katich was trapped lbw by James Tredwell for 54, while Michael Bates added 30 as Hampshire reached 229-6.

However, still more than half the day's play was lost, and the draw remains the most likely outcome on Saturday.

Hampshire, 50-3 at the end of Wednesday's play and 90-3 at stumps on Thursday, finally got a sustained period at the crease in the 44.2 overs possible.

Katich was first to go when Tredwell ended a fourth-wicket partnership worth 99, before Sean Ervine was out without scoring, bowled by Matt Coles.

Bates was the next man to be dismissed, caught at slip by Tredwell off Charlie Shreck.