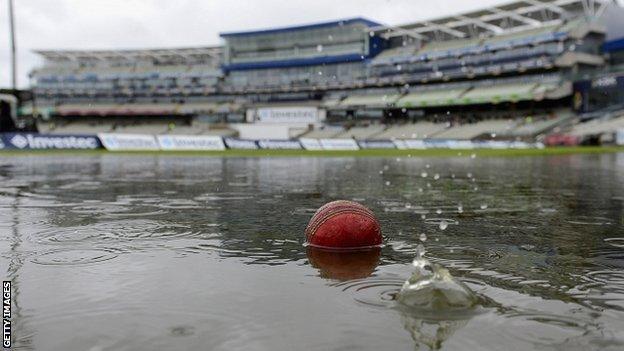 The second successive day of the third Test between England and West Indies at Edgbaston was abandoned without a ball being bowled because of rain.

After the first day was washed out on Thursday, the second was called off at 13:50 BST following further showers.

The last time the first two days of a Test in England were both washed out was against Australia in 1964.

The weather could scupper England's hopes of sealing a 3-0 series sweep but it is expected to improve on Saturday.

The delayed start has given West Indies batsman Shivnarine Chanderpaul extra time to recover from a side injury.

Chanderpaul, the world's top-ranked batsman, had a scan on Thursday and a slight strain rather than a tear has been diagnosed.

It will be the end of the tour for the left-hander if he does not feature because he is not in the Windies squad for the one-day internationals or the one-off Twenty20.

A minimum of 156 overs have been lost from this Test - with only eight extra overs permitted on each of the final three days, assuming no further interruption from the weather.

England wicketkeeper Matt Prior was passed fit on Thursday following an eye infection, so reserve Steven Davies returned to county action with Surrey.