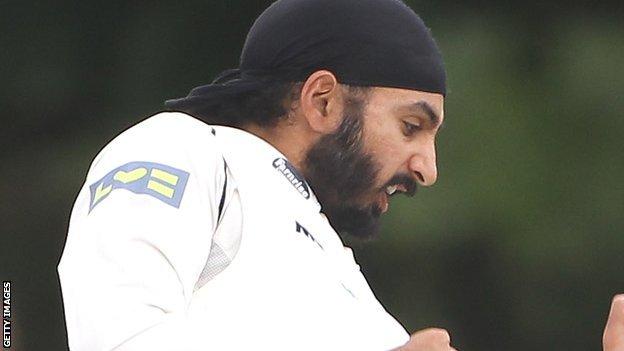 Surrey resumed the final day on 39-1 and Panesar (3-33) was at the heart of things as the visitors slumped to 197-8, facing an innings defeat.

Ed Joyce and Chris Nash needed 11 balls to knock off the 22 needed for victory.

This was Championship cricket at its very best, with the game not being decided until deep into the final hour

It gave Sussex their second victory of the season, while Surrey are now 14 points clear of the Division One relegation zone, but have played a game more than eighth-placed Worcestershire going into the break for Twenty20.

But Hamilton-Brown, batting with a sore hamstring, held them up with a 160-ball three-hour innings.

He added 32 with Lewis for the ninth wicket which used up 14 overs and last man Jade Dernbach survived with him for another eight, before Anyon made the decisive breakthrough with six overs remaining.

Joyce led the charge for victory with 19 off 11 balls, including three fours and a six to win the game, while Nash faced only one ball for his one not out.

"This was Championship cricket at its very best, with the game not being decided until deep into the final hour

"Surrey deserve enormous credit for battling to the end and, had the other batsman shown the resolve of skipper Rory Hamilton-Brown, Surrey might have escaped with a draw.

"However, Sussex skipper Mike Yardy showed patience and imagination, and ultimately held his nerve as his side worked their way through the Surrey batting order.

"A second Championship win of the season will be a welcome relief for Sussex after defeats against Notts and Middlesex, and will send the squad into the T20 competition in good heart."