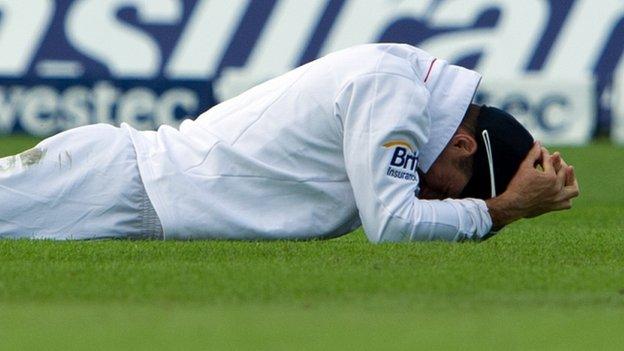 West Indies dug deep to reach 280-8 on day three of the rain-hit third Test at Edgbaston as a below-par England made hard work of the tourists' middle order.

Put in to bat by England on a pitch that had spent two days under cover because of persistent rain, the Windies survived the first of three dropped slip catches to reach 85-1 at lunch.

England hit back in the afternoon session to reduce the tourists to 152-5, with recalled pacemen Graham Onions (3-56) and Steve Finn both among the wickets.

But a typically-assured 76 from Marlon Samuels and a dogged unbeaten 60 from Denesh Ramdin ensured the Windies ended the day in the ascendancy, frustrating England's hopes of a series whitewash.

"The decision to rest both James Anderson and Stuart Broad not only affected the balance of the attack, it had an impact on other areas of the team as well. Ian Bell dropped two catches at third slip, a position in which I have never seen him field for England before, and a spot in which Anderson is usually extremely reliable."

England will no doubt rue the dropped catches, with Ian Bell's ugly fumble to reprieve Adrian Barath on four by far the most costly.

But the decision to rest James Anderson and Stuart Broad was also a factor as England's new-look attack lacked penetration with the new ball and struggled to generate the swing that makes Anderson in particular such a force.

The match finally got under way on the third morning after the first two days of a Test were washed out for the first time in England since 1964.

England captain Andrew Strauss won the toss and opted to bowl, no doubt hoping to expose the Windies' fragile batting order, which featured debutant Assad Fudadin at number three in place of Kirk Edwards and all-rounder Narsingh Deonarine for the injured Shivnarine Chanderpaul.

But the tourists' opening pair showed admirable resilience to weather the new ball in a dogged partnership of 49 in 17 overs.

England had to wait 80 minutes for their breakthrough, which arrived when Graeme Swann reacted sharply to catch an edge from Kieran Powell off Tim Bresnan.

After reaching lunch without further loss, the Windies came unstuck in the afternoon session as England's miserly bowlers starved them of scoring opportunities and picked up four wickets in relatively quick succession.

Barath, badly dropped again by Bell on 40 after fending off a lifter from Finn, failed to make England pay for their generosity as he was trapped in front by a quicker one from Onions in the next over.

"England let West Indies off the hook and they need a better performance tomorrow. If they had held their catches, the bowlers would have been up on confidence and England might have knocked a few more over and had them 60-4. If they had been at their best they could have bowled the Windies out for 200."

Darren Bravo's disappointing summer continued as he mustered only six runs before prodding the ball back to bowler Finn.

Then Fudadin (28) was surprised by a fierce bouncer from Bresnan and gloved the ball to Bell, who finally clung on to a simple catch to ironic cheers from his home crowd.

When Deonarine was caught by Strauss at first slip to give Onions his second wicket, England were right on top at 152-5.

Once again, however, the West Indies resistance was led by Samuels, who kept out a 91mph Finn yorker from his first ball before settling down for another of his composed and elegant innings.

He effortlessly dispatched anything over-pitched from the seamers through the covers and tore into the off-spin of Swann, whom he clouted for a six over cow corner and a four through the covers off successive balls to reach his fifty.

Samuels and Ramdin added 55 for the sixth wicket before Bresnan got a ball to nip back off the seam and trapped Samuels in front of off stump to swing the initiative back England's way.

Captain Darren Sammy was dropped by Strauss at first slip on 16, but fell without adding to his score in the following over when the England captain held on to another sharp chance.

Debutant spinner Sunil Narine was bowled by Onions for 11, before Ramdin completed his ninth Test fifty off 97 balls to help steer the tourists to the close.