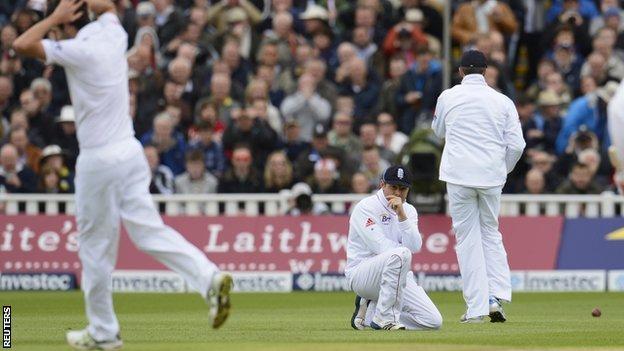 England did not pick their best team for the third Test at Edgbaston and, when the match finally got under way on day three, they did not play their best cricket.

The decision to rest both James Anderson and Stuart Broad not only affected the balance of the attack, it had an impact on other areas of the team as well.

Ian Bell dropped two catches at third slip, a position in which I have never seen him field for England before, and a spot in which Anderson is usually extremely reliable.

As a commentator, you get used to people's fielding positions and there was an unfamiliar feel to England today that seemed to contribute to a display that was not up to their usual standards.

In Test cricket, you should always play your best players because it is the pinnacle of the game.

"England let West Indies off the hook and they need a better performance tomorrow. If they had held their catches, the bowlers would have been up on confidence and England might have knocked a few more over and had them 60-4. If they had been at their best they could have bowled the Windies out for 200."

Steven Finn and Graham Onions are very good bowlers but they know they are not playing on merit. It does not matter how well they perform at Edgbaston, they are not going to play in the next Test if the other two are fit and that is not the way I would like England national selection to operate.

We all know the amount of international cricket is the problem and I don't blame England coach Andy Flower because he has been presented with a very difficult situation to manage.

The visit by Australia for five one-day internationals in the middle of the summer is purely a money-making exercise and has forced him into making decisions he might not otherwise have made.

England's three dropped catches let the Windies off the hook but I was pleased to see their batsmen show a bit more discipline and determination.

Adrian Barath set the tone for an innings in which they really knuckled down and looked as though they wanted to play securely and put a high price on their wicket.

Marlon Samuels again played beautifully, his cover drive very much to the fore, and it is just a shame he couldn't go on and get his second hundred of the series.

With time running out, it will be difficult for England to force a victory from this position and they need to bat positively tomorrow.

Andrew Strauss will probably want to build a healthy lead, but I would like to see England get level with the Windies score, declare and give themselves more time to bowl them out.

The tourists do not respond to pressure very well and, without the services of the obdurate Shivnarine Chanderpaul, there is always the potential for a collapse on the final day.