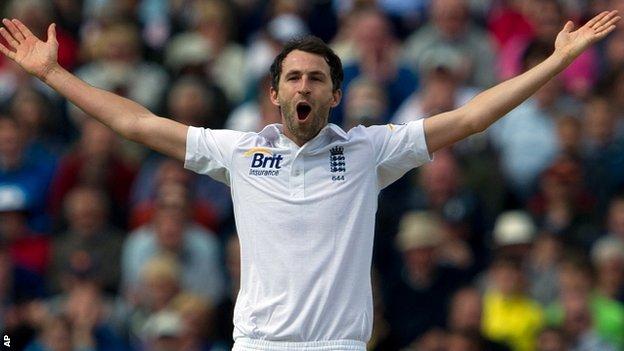 Graham Onions said he was delighted to be back in the England team as the third Test against West Indies got under way on day three at Edgbaston.

Onions, who came into the side for the rested Stuart Broad, has battled back from career-threatening injuries to play his first Test since January 2010.

"It's always nice playing for England, but when you've gone through that, it is even more special," he said.

"A couple of years ago I didn't think I was going to play cricket again.

"When I put that shirt on and my cap on, it added to the nerves but it's good nerves and I really enjoyed it. It was like a second debut.

"We let them off the hook. We need a better performance tomorrow. If we had held the catches the bowlers would have been up and we might have knocked a few more over and had them 60-4. If we had been at our best we could have bowled them out for 200."

"It's been more than two years since I played and I'm delighted that I came back from lot of injury troubles.

"The lads put in lot of hard work and I'm proud to be part of it."

England's bowlers were made to work hard by West Indies, with Marlon Samuels (76) and Denesh Ramdin (60 not out) frustrating the hosts.

Onions admitted it had been tough going on a pitch which was still recovering from two days of heavy rain.

"It would have been nice to bowl them out, but we're pretty happy in pretty decent conditions," he said.

"The way the lads stuck at it on this outfield, massive credit to the groundsman, but the outfield was pretty sapping on the legs.

"We know on these types of wickets you've just got to hang in there and wickets will happen in clusters.

"We have to give West Indies some credit as well, they batted well and played very nicely."