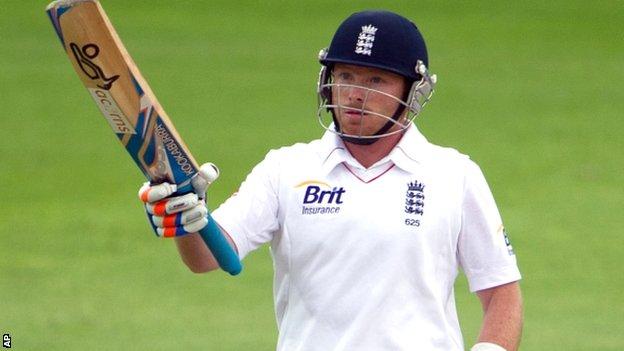 Team director Andy Flower backed Ian Bell to become one of the "very best" one-day players after recalling the batsman to the England squad.

Bell replaces the retired Kevin Pietersen for the three-match one-day international series against West Indies, which starts on Saturday.

Flower indicated that Bell would open the batting with captain Alastair Cook.

"Ian Bell is one of the best players in the world and he can adapt to any form of the game," Flower told BBC Sport.

"This might just be the opportunity he needs to really cement his place in the one-day side.

Made his only one-day international century against India at the Rose Bowl in August 2007, making an unbeaten 126 batting at number three in a 104-run victory

"He's shown plenty of times that he has what it takes to do well but maybe he hasn't had that one breakthrough innings that really grab a game by the scruff of the neck and wins.

"Once he does that the world's his oyster and he could be up there with the very best.

The Warwickshire batsman, who has scored 3,234 runs in 108 ODI games, was left out of the squad that beat Pakistan earlier this year.

But the 30-year-old has been in consistent form in Test matches this summer, with three fifties in four innings against West Indies, two of them unbeaten, resulting in a series average of 111.

The first ODI takes place at Southampton on 16 June with other games at The Oval and Headingley.

A separate Twenty20 squad has been announced for the one T20 international against West Indies at Trent Bridge on 24 June and there is no place for senior bowler James Anderson, who was also rested for the final Test at Edgbaston.

National selector Geoff Miller said: "We are anticipating a very competitive series against West Indies and are looking to continue to build on the progress we made in limited overs cricket earlier this year against Pakistan.

"Kevin Pietersen's recent decision to retire from one-day cricket means we now start looking at other options available to us as we prepare to defend our ICC World Twenty20 title and look towards next year's ICC Champions Trophy and the 2015 ICC Cricket World Cup."