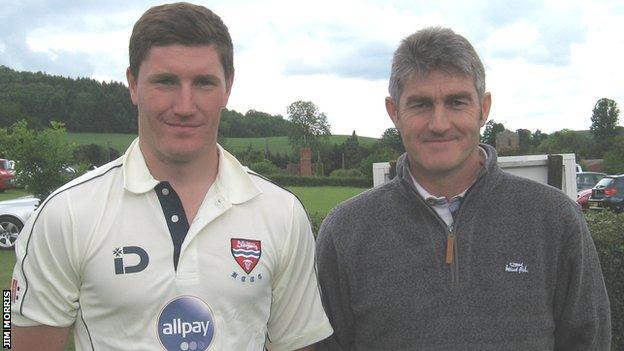 Cornwall ended the first day on top, 97 runs ahead, after 23 wickets fell, but no further play was possible.

Cornwall were bowled out for just 128, Nick Powell and Callum Stewart each taking three wickets.

Play was abandoned for the second day running an hour before the scheduled 11 o'clock start as water had got under the covers.

Both counties took eight points from the match.

Herefordshire's next three-day Championship clash is at home to Shropshire at Colwall, starting on 24 June, when Cornwall will be taking on South West rivals Devon at St Austell.

A little bit of history was made by Herefordshire debutant Greg Leighton.

Following in the footsteps of father Jeremy, who played for the county between 1992 and 1997, they become the first father and son (pictured above) to represent Herefordshire in Minor Counties cricket.

He took a tidy 0-23 in eight overs on his debut, as well sharing a partnership of 22 for the seventh wicket with fellow debutant Andrew Kimberlin before becoming became Libby's fourth lbw victim.

Powell's first innings haul of 3-22 was a career-best 3-22 for Herefordshire.