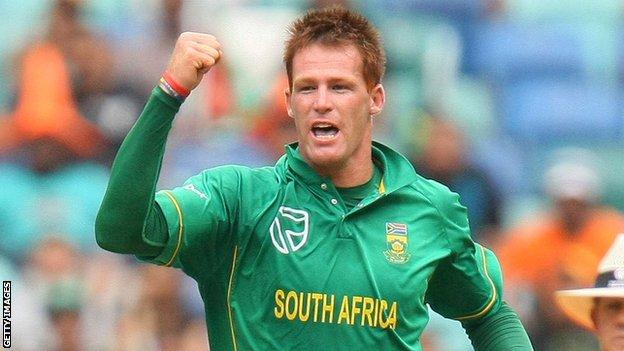 The 26-year-old has played nine T20 internationals for South Africa, taking 12 wickets at an average of 21.75 and an economy rate of 8.07 per over.

"This is a great opportunity for me to make an impression. My speciality is death bowling," he told BBC Sussex.

"Hopefully when the moment gomes around, I'll be the guy with the ball in hand getting us over the line."

Theron, who made his first-class debut in 2005, represented Warriors in South Africa's T20 competition this season, taking seven wickets in eight matches.

He also played for Deccan Chargers in this year's Indian Premier League.

He added: "County cricket is a wonderful stage to showcase you skills, put in some performances, and knock on a few doors.

"I'd like to prove that, in the terms of South Africa, I am the best death bowler in the country."

It will be the first time Theron has played county cricket in England but the Potchefstroom-born player spent two summers playing club cricket for Brighton & Hove earlier in his career.

Sussex manager Mark Robinson said: "We're delighted to have captured a player of his quality and experience."

"The finish of an innings can win or lose a match and Rusty is a proven performer in bowling at the death."

The Sharks begin their campaign against Kent Spitfires in Canterbury on Tuesday.