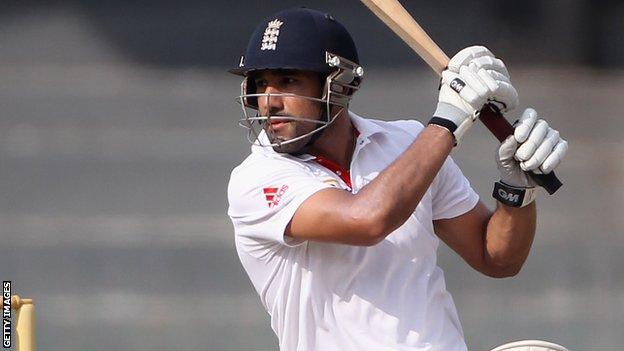 Essex coach Paul Grayson believes Ravi Bopara is in his best form for four years ahead of his call-up to the England one-day squad.

Bopara's Championship century against Northants on Saturday was his second within a week and third of the season.

And Grayson believes he is matching the form which saw him hit a double hundred against Leicestershire in 2008.

"He is in a good place. He feels like his game is in good order," Grayson told BBC Essex.

Bopara, 27, will also be pushing for a place in the England Test side to face the touring South Africans later this summer after recovering from a side injury.

His 120 in last Monday's CB40 victory over Gloucestershire, followed by his stunning knock of 174 at Wantage Road, will have improved his chances of ousting youngster Jonny Bairstow from Andrew Strauss's team.

"He had to work really hard for his first 20 runs and it was a really good example to our younger players that you've got to earn your runs to get to 20 or 30, get the ball a little bit softer and then you can cash in a little bit later."

Meanwhile, Essex have also been buoyed by the the return of Ryan ten Doeschate from Indian Premier League duty.

The Dutchman hit 26 not out in his first knock for Essex this year, four days before the domestic Twenty20 campaign begins.

"Let's hope that's a good thing for the coming weeks with the T20 starting," said Grayson.

"Last year he came back and was a little but burned out, a little tired. But he's been hitting the ball well in the nets and looked very confident with how he hit the ball against Northants.

"The manner in which he scored his runs was pleasing to us."