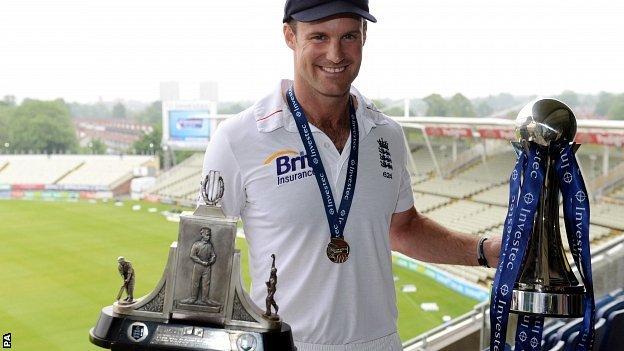 Captain Andrew Strauss said England lacked intensity in the third Test against West Indies and would need to sharpen up against South Africa later in the summer.

The match ended in a draw after the fifth day's play was washed out without a ball being bowled, with England 221-5 in reply to West Indies' 426.

"We certainly didn't get everything right while we were out there in the field," said Strauss.

"There are areas we need to sharpen up on - obviously we dropped a few catches, you don't want to be in a situation when number 11 gets 95 all that often and we found ourselves under a bit of pressure with the bat.

"The most important thing England can take from this series is Andrew Strauss getting runs. That was the big talking point - is he still good enough to bat at this level? If he'd not scored runs in this series, we would have been talking very strongly about his future.

"But I thought Kevin Pietersen and Ian Bell batted very well, Steven Finn and Graham Onions aquitted themselves exceptionally well and it was great to have them back in the side.

"Over the course of the three matches there were a lot of things to be very happy about but we are aware that we have to impove our standards a bit before the SA series starts."

Onions and Finn were recalled to the attack after England controversially rested new ball pair James Anderson and Stuart Broad.

But Strauss insisted the decision to rest the duo had no bearing on England's under-par display.

"I don't think it had anything to do with players being rested," he said.

"As a Test side, I think we've learnt a little bit more about the balance of our bowling attack and what each of our bowlers brings to the party in differing conditions."

Rain delayed the start of the final day's action and the umpires called the match off at 15:10 BST with no sign of an improvement in the weather.

The match had already lost the first two days because of rain.

England sealed the series after wins at Lord's and Trent Bridge but had been seeking a 3-0 whitewash.

It is now 12 years since West Indies last won a Test in England at Edgbaston in June 2000 - and they have not won a series in this country since Viv Richards led his side to a 4-0 victory in 1988.

"This Test match was frustrating for all sorts of reasons and rain wiping out first two days doesn't help with intensity of the cricket.

"We are very happy to have won the series, the West Indies have got some dangerous players and we were able to overcome that challenge."

It was a good personal series for Strauss, whose place in the team had been questioned following a disappointing run of form.

But he answered his critics with centuries in the first two Tests and was named England's man of the series for his 326 runs made at an average of 65.20.

"To get a couple of hundreds and make sure that story didn't snowball was satisfying," he said. "You always need runs at the top of the order and it was my turn to do it."

Marlon Samuels was named West Indies' player of the series while wicketkeeper Denesh Ramdin was fined 20% of his match fee after being found guilty of breaching the sport's code of conduct.

Ramdin held up a note from his pocket criticising Sir Viv Richards after completing his century on Sunday.