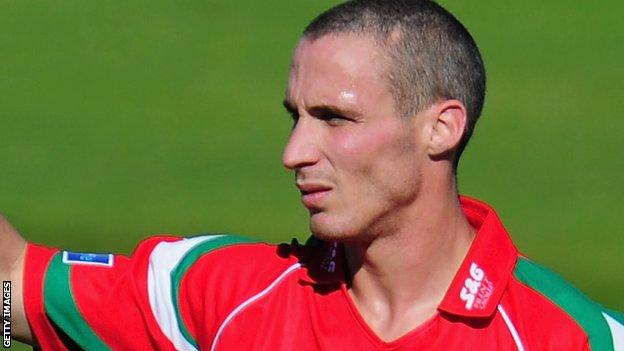 Simon Jones insists their Twenty20 rivals will be "worrying" about playing the Welsh Dragons this year.

Explosive T20 specialist Shaun Marsh is to partner fellow Australian Marcus North at the top of the order in on Thursday.

"We'll be a force to be reckoned with," said former England bowler Jones.

"There was a lot of talent at the club anyway but with the signings we've made, I think there'll be a couple of teams around the circuit worrying about playing us.

"We've got some serious strikers here and in the bowling department we have a lot of skills and experience.

"We showed glimpses of our ability last year and we didn't quite finish off games, that killer instinct is something we have to nail this year.

"We've had a few team meetings about it and I think it is something we need to start doing rather than talking about - and that is down to us as players."

The county have won just one competitive game this season and have not qualified from the T20 Cup's pool stages since reaching the quarter-finals in 2008.

But England's 2005 Ashes hero Jones feels the addition of Marsh, regarded as one of the world's best T20 batsmen, is "awesome."

"There will be a couple of bowlers on the counties worrying about him I tell you," said the 33-year-old paceman.

"He's a class player. To have him in a batting line-up is awesome. We look a serious unit now and I think people will take us seriously."

Jones feels the Dragons, who reached the T20 finals day in 2004 before losing in the semi-finals, will be inspired this year by the fact their Swalec Stadium home in Cardiff will host finals day on 25 August.

And after guiding the Dragons to their first win of the season on Sunday as they defeated Durham Dynamos in the CB40 league, Jones said: "This puts us in good stead for the Twenty20.

"It has given us a massive boost and it is funny how things can snowball.

"And the fact we have the finals day is massive, the fans will be back here if we get there and I think we can with squad we have got."