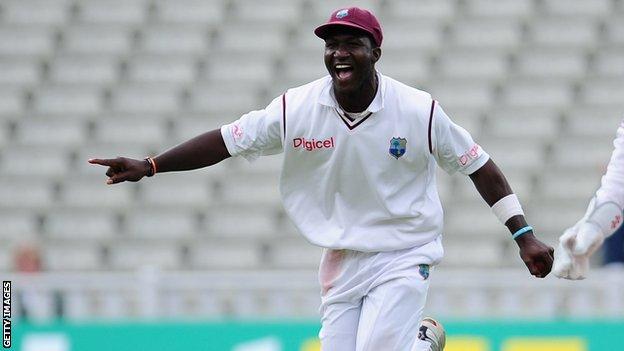 West Indies captain Darren Sammy remained upbeat ahead of the one-day series, despite losing the Test series to England.

The hosts retained the Wisden Trophy by a 2-0 margin after the final day's play in the third Test at Edgbaston was washed out.

"We're confident as a one-day team, and we're excited about this series," said the St Lucia all-rounder.

"We felt we competed in the Tests, but didn't compete for long enough."

"But we scored over 300 three times in three Tests without our top order contributing. Look at the way Marlon Samuels [who scored 386 runs at an average of 96.50, batting at five or six] batted throughout the series.

"We went into this final Test match with a never-say-die attitude, and the way our last-wicket partnership of Denesh Ramdin and Tino Best played was a good example of that."

Ramdin (107 not out), who was fined 20% of his match fee for displaying a public message to Sir Viv Richards, shared an entertaining stand of 143 with Best, who made 95 - a Test record for a number 11 - to take the game away from England, although losing three of the five days to rain ultimately prevented a positive result.

Sammy added: "You all know what Tino is like, whatever he does will be exciting and full of drama.

"Then, we went out yesterday and took five wickets on a flat pitch."

The tour squad for the one-day series, which begins in Southampton on Saturday after a warm-up game against Middlesex in midweek, is now boosted by the arrival of limited-overs specialists Chris Gayle, Dwayne Bravo, Dwayne Smith and Kieron Pollard, who have all been playing in the Indian Premier League.

Sammy said: "As a West Indies side, we've always had cameraderie in the dressing-room, but we've spoken about what we can expect in Test, one-day and Twenty20 cricket.

"As a team, we've got more experience of playing one-day cricket.

"With the calibre of players we've got, we think we can get to the semi-finals of the World Twenty20 in Sri Lanka, or even win it.

"But with Tests, it will take longer to start winning games consistently."