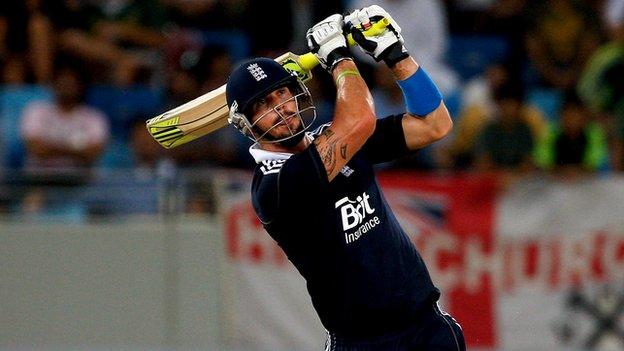 England coach Andy Flower says he tried to persuade batsman Kevin Pietersen to reconsider his retirement from the one-day form of the international game.

Flower told BBC Test Match Special he thought Pietersen's decision was "sad" and that he tried to "dissuade him" from making the choice.

Pietersen, 31, said a punishing schedule had forced the decision.

But team director Flower said: "The backdrop to this is that he doesn't want to play one-day cricket anymore."

He added: "When Kevin told me he wanted to retire from one-day cricket I must have had three or four subsequent meetings with him where I tried to dissuade him from doing so. I think it's really sad he won't be paying all three forms of the game. He's in incredible form, technically he's excellent.

"He can rest, it's not as if KP can't ever rest, we do rest him and if you look back at various series that's what we've done. He's also had significant chunks out with injury, it's not that he doesn't get a chance to rest."

Announcing his retirement from limited-overs cricket, Pietersen said he had wanted to continue playing Twenty20 games. However, players on England central contracts are not allowed to pick and choose which forms of the sport they play.

You always have to respect people's decisions, but the consequence is we won't be seeing our best Twenty20 player in the England team

Flower said: "All the players and the players' representatives signed up to that, you can't choose between one of the limited-overs formats, it's there in black and white. Kevin is very clear that he doesn't want to play one-day cricket any more so that makes him unavailable for Twenty20 cricket, that's an ECB policy.

"The reason for that policy is that 50-over cricket is an integral part of ECB strategy. England have never won a 50-over World Cup and we are very hungry to do so.

"The board is also very concerned about setting the right precedent. If you set a precedent whereby players can pick and choose between the limited-over forms, they are worried about five or six players doing a similar thing. This would degrade limited-overs cricket. This policy is in place for a good reason and Kevin and his representatives were aware of that.

"I hope that after he's retired he doesn't regret that but that's the decision that's been taken."