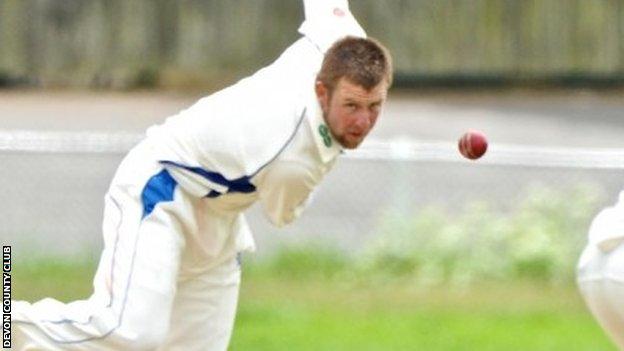 Devon director of cricket Roger Newman has hailed debutant bowler Ryan Bougourd after he took seven wickets in the county's win over Wales.

Devon beat the Welsh by five wickets with Bougourd taking 7-41 as Wales were bowled out for 124 in a rain-reduced one-innings match at Exmouth.

"Ryan Bougourd has exemplified everything that we're trying to do," Newman told BBC South West.

"If you put the time in, if you put the work in, if you've got the talent that Ryan has obviously got and you're prepared to work at that talent then we will give you the opportunity to showcase that talent on the biggest stage in the county - and he came up trumps."

The 20-year-old tennis coach plays alongside Devon captain Chris Bradley at Bovey Tracey and has trained with the Devon side since the winter.

"There have been rumours around the county that he's a friend of the captain's, but he proved it's about talent identification," added Newman.

"Chris rated him, I saw him in the indoor school last year and I rated him. He has worked really hard at his game right throughout the winter and he's got the rewards that he fully deserves."

Devon take on Cornwall in their next Championship match on 24 June.

But before that, they must focus on the quarter-finals of the MCCA Trophy against Wiltshire on Sunday at Corsham.