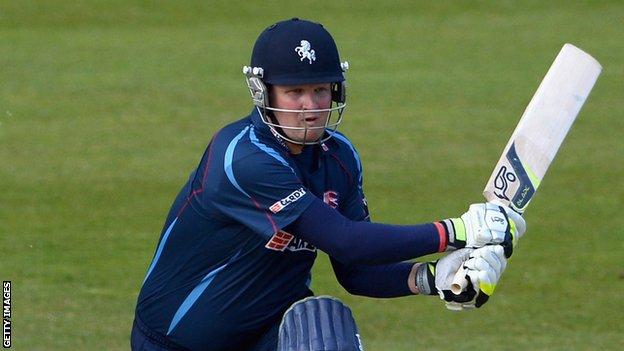 Kent captain Rob Key says their form in the CB40 shows they could have another successful FL t20 campaign.

The Spitfires, who have lost just one of their one-day games this season, play their first Twenty20 group match against Sussex on Tuesday.

He told BBC Radio Kent: "There's a lot of teams out there with big-name players and big overseas stars.

"But we've showed in the 40-over game that we are a very well organised one-day unit."

He added: "We just need to continue the form in Twenty20 that we've had in other forms of the game."

"You only need one or two players to have a real stand-out tournament, like Azhar Mahmood did last year with the runs he scored and the death bowling we had," Key said.

"If you get those facets right, with one or two batsmen up there and bowlers who can bowl well as the death, we've got the middle order.

"Matt Coles will get a good opportunity to show what he is about under pressure and death bowling.

"It will be great to see a young Englishman going into the competition with that type of role. It's not often it happens and he'll be better for it."

Meanwhile Key believes their improved performances in the field this season have made them a more competitive side.

"[Head coach] Jimmy Adams deserves a lot of credit for that," Key continued.

"We've done a lot of work on our fielding; every morning and right through pre-season.

"We've got some younger blood in there in the one-day cricket.

"We've got people like Sam Billings, Sam Northeast and Adam Ball. They make us look better with cart-horses around like me."