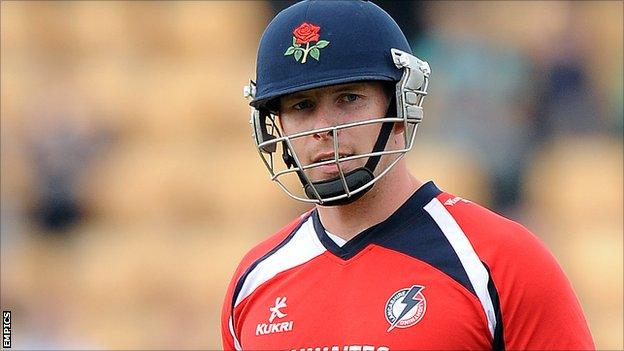 Lancashire are hopeful of overcoming the disappointment of their semi-final exit last year by winning the domestic Twenty20 tournament for the first time.

In 2011, they lost to Leicestershire following a one-over eliminator.

"It's going to be our aim to get to the finals day, then into that final and then hopefully win it," all-rounder Steven Croft told BBC Radio Lancashire.

Wicketkeeper Gareth Cross added: "We've always been competitive and looked like one of the strongest teams."

Lancashire have never won the domestic Twenty20 title since the competition's inception in 2003. Their best performance came in 2005, when they were beaten in the final by Somerset

Historically, Lancashire have a consistent record in Twenty20 cricket. They were beaten finalists in 2005, and have reached three semi-finals and a further three quarter-finals in the competition's nine-year existence.

But the competition has often offered great disappointment to the Red Rose, with their nail-biting exit last August one of the most difficult defeats for them to take.

In a rain-affected semi-final, Cross hit a six off the final ball of Lancashire's innings to tie the scores and force a one-over eliminator.

The Foxes, however, proved too strong and went on to beat Somerset in the final.

Cross said: "It was a good game and it was a pity to end up on the wrong side.

"We fancied ourselves to go on and win it but it didn't happen. Hopefully this year, we can do it.

"We've lost Junaid (Khan) which is a big blow for us, but we've signed Yasir Arafat, who's obviously a world-class player.

"And we've still got people like Glen Chapple, who can play if we need him, Sajid Mahmood and Ajmal Shahzad."

While struggling to defend their County Championship title, Lancashire have made a promising start to the CB40 competition, winning three of their first five matches.

And Croft, who has been captain of the one-day side in Chapple's absence this season, says the team will not change their approach in the shortest form of the game.

"I think when we do that, we generally do play better, rather than just having a bit of a look and waiting for something to happen," said the 27-year-old.

"We generally look at it as an extended version of Twenty20 cricket and I think a lot of sides have done that."

Lancashire start away at Derbyshire on Thursday and then get the chance for revenge against Leicestershire less than 24 hours later.

"They are always competitive sides," added Croft. "We owe Leicester one so hopefully we can start off with a win at Derby and then head over to Leicester.

"They won't be easy games, they're all tough, but hopefully we can get on an early roll."